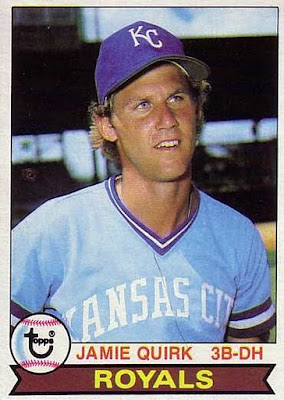 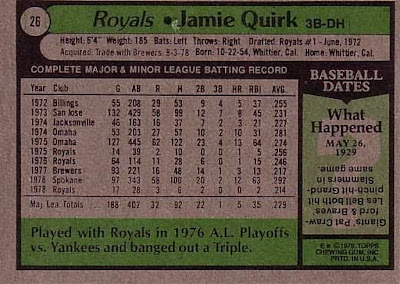 Card Front:﻿ It is a blue bonanza on the front. Blue hat, blue eyes, blue shirt, blue sky. Thanks Topps, maybe a little bit more in the way of colors please. Can't really decide if he plays 3rd or DH's, let's just put both. By the end of Jamie's career, he would play at ever position, except Pitcher.

Card Back: After being a 1st round pick in 1972, Jamie made the slow climb through the minors to spend a little bit of '75 in KC. He would be traded by the Royals, only to be eventually traded back to Kansas City. Even later in his career, Jamie would continue to find his way back to the Royals again. Was it the BBQ in KC that kept drawing him back?

Six degrees or less to Seattle: Jamie was a man of many uniforms. Some times he was with a team for only a few games. With his stop in Oakland in 1990, he would play with Harold Baines. Harold was a teammate with Jason Bere as a member of the Chicago White Sox in 1997. Jason would hook up with Ben Broussard as a Cleveland Indian in 2003. Ben would make his way to the Mariners in 2006,  and stick around for the 2007 campaign as well.

Blog related to the team: It is hard to believe we have our second Royal before many teams are represented yet. Oh well, let's give out some KC Royals love. Another of the many Royals followers is Eric of Manupatches&Moustaches or Chrome Scratches or... Eric loves all things shiny and also is a fan of Rockie Dexter Fowler. Give him a read, it's always entertaining.

"It is a blue bonanza on the front. Blue hat, blue eyes, blue shirt, blue sky. Thanks Topps, maybe a little bit more in the way of colors please."

Maybe this was the rationale behind having the team banner on Royals cards be brown with yellow print...