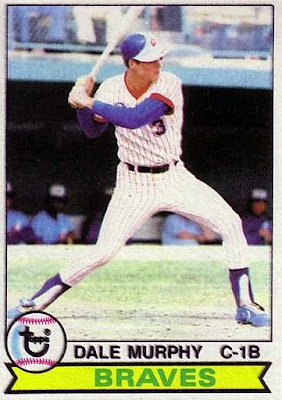 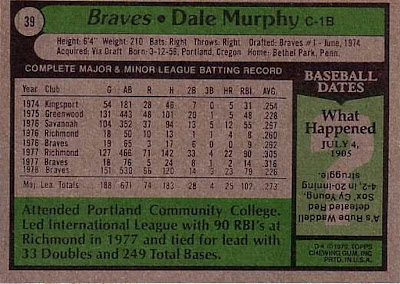 Card Front: Here is a young Dale sporting the pinstripes. I don't think it is At Fulton County Stadium, but you definitely tell they are playing against the Montreal Expos. I don't think the Braves were meant to wear stripes, but I would love them to go back to the old look with the feathers and two tone with the little a.

Card Back: Dale was a #1 pick in the 1974 draft. He made a fairly quick but natural progression. Who would have known that a catcher would end up as a 2 time MVP as an outfielder. I think at 6'4", he might have been too tall to catch. How about Cy Young throwing a 20 inning complete game back in 1905??!!

Six degrees or less to Seattle: In all his time in Atlanta, Dale had many teammates. In 1989, Dale was a Brave with Kent Mercker. Kent would be around a long time, playing with Bill Bray who were members of the 2008 Cincinnati Reds. Two years later in 2010, Willie Bloomquist would team with Bill in the Queen City. Wille was a kind of do it all for the Mariners from 2002 through the 2008 season.

Blog related to the team: There are many fans of the feathers out there. I felt I had to start with the Godfather. While he might go off the deep end sometimes with ponies, you have to think Dayf of Cardboard Junkie is amongst the tops of bloggers. I know that his was one of the first blogs I read. Thanks for the inspiration Dayf.