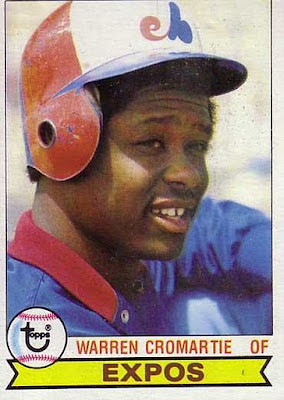 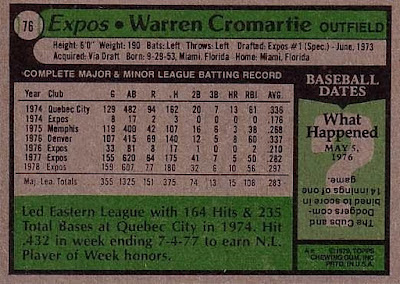 Card Front: ﻿A nice close up of Warren hanging out at the batting cage. I do remember the days of the satin jackets and always wishing I could own one as a kid. One thing I do miss about the Expos is the colorfulness of the uniforms. I loved the Red, White, and Blue caps, trying to decipher exactly what the logo was, and the classy powder blue road unis. Warren looks like he's contemplating where to go for dinner later...

Card Back: The beginnings of Warren's storied career. Did you know that the Expos were the fourth time he had been drafted from June of 1971 through January of 1973. Warren would stay in Montreal until the end of 1983 before doing the unheard of and signing with the Yomiuri Giants and spending 6 seasons in Japan. He was so good over there learning from manager Sadaharu Oh he would be the 1989 MVP. Warren would come back to be a Royal in 1991, but hung it up after the season.

Six degrees or less to Seattle: In Warren's first season North of the border in 1977, Warren had a big name teammate behind the plate in Gary Carter. Fifteen years later, in 1992 Gary would be back in Montreal with the Expos and play with Marquis Grissom. Marquis would move around quite a bit and be a member of the 2004 San Francisco Giants with pitcher David Aardsma. For the 2009 and 2010 seasons the DA was the closer for the M's. David had Tommy John surgery for 2011 and is in the Yankees system now.

Blog related to the team: I don't know if it is because they have left Montreal, played in Puerto Rico, and eventually became the Nationals, but where are all the Expos fans?? I have decided to try and tie and tie Nationals fans to the team because they are the history of the team. One blogger that I know of that is happy to pick up the shattered team from Montreal is Kirk. He has a couple blogs, but his that is dedicated to the modern day Expos is called Curly W Cards. I'm sure if you talk to Kirk he has a loving for the history of his now hometown team. Hook him up with some Expos love!

The Expos' logo is the shape of a capital "M", for Montreal. Within the M, in two different colors, are a lower-case "e" and a lower-case "b", whihc stand for Expos and baseball. Montreal Expos baseball.