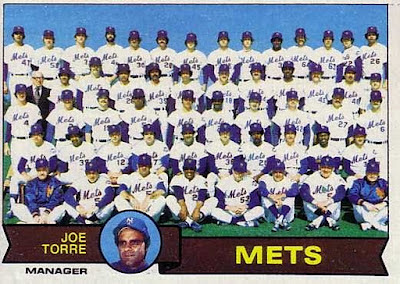 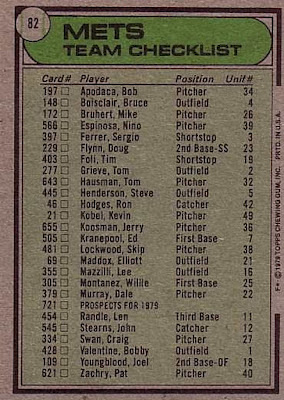 ﻿Card Front: Here is Joe and his 1978 Metropolitans. It sure seems there are a lot of people in the team photo. Guys in suits, young kids, some minor leaguers. If you don't count the suit, there are 53 players, coaches and others in the pictures. I guess they figured why not make everyone famous in New York for the 1979 season. Joe didn't have very good teams his first go round in NY going 286-420 with the Mets.

Card Back:  Ahh, the good old Topps checklists I love. Some Mariners on there include Steve Henderson, Skip Lockwood was a Seattle Pilot in 1969, Bobby Valentine was here for a moment in time, and the famous Lenny Randle for this play in the Kingdome in 1981:

Six degrees or less to Seattle: Joe was around for long time as a player. In 1964 Joe was with the Milwaukee Braves with Felipe Alou. Ten years later in 1974, Felipe came back to the new incarnation in Milwaukee to play with Robin Yount on the Brewers squad. Fast Forward to 1993 and Robin would still be with the Brew Crew to play with Tom Lampkin. Tom spent three seasons from 1999-2001 playing in the Emerald City as a Mariner.

Blog related to the team: As we all know the Mets recently got their first no-hitter in team history. One guy that I know was particularly happy about that feat has a newer blog dedicated to his beloved Mets. jacobmarley is the fine purveyor of the Starting Nine. I have to say I agree to his theory of nine players on the field, and nine pockets in a page might be coincidence, but it works for all us collectors. Go and show him that there is love for the other team in New York besides that other team in pinstripes.