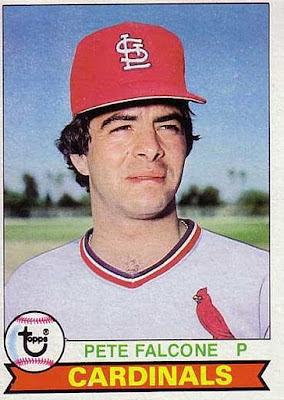 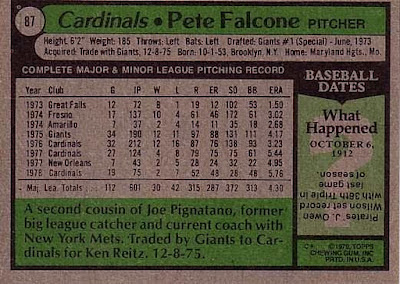 Card Front: There is so little that can be said about this card. Topps got so close that Pete's head fill up almost the whole card. I can't tell if Pete is unhappy or if it's one of those glamour pics look away poses. I don't think they could get his hat to sit much higher off his head, but the little redbird at the top of his jersey makes up for all the deficiencies.

Card Back: Pete is a traveling man. A little Northwest, some California, head to the Midwest in the majors and the minors, and why not go east and play in the Big Apple? It had to feel special to Pete to be able to come close to home in Brooklyn to play in Queens for his local team. Pete was already traded to Mets in December of 1978 long before these came out to us kids in 1979. The game was different in 1912, but 36 triples in a season?! Most guys don't get that many in a career in today's game.

Six degrees or less to Seattle: During Pete's time in a Mets uniform, he spent time in 1981 playing with Ray Searage. Ray would move on to play on the West Coast in 1990. Another player on the Los Angeles Dodgers roster in 1990 was Darren Holmes. Darren had a tendency to move to many other teams, and finished his career in Atlanta in 2003 as a Brave with Horacio Ramirez. Ho-Ram was part of a STUPID trade that sent Rafeal Soriano to Atlanta and Horacio spent the 2007 season in Seattle en route to a 8-7 record with a 7.16 ERA.

Blog related to the team: Ahh, Cards fans are everywhere. Whenever one comes up on this blog I know I can find a blog to love on. I recently found our future in the collecting world in a young man that is running a fantastic blog! You must go over and check out Andrew's Baseball Cards. He recently just held a contest, and loves his Redbirds. Since he is a teenager, let's help him out and load him up with readers, and maybe send him some cards to keep him in our great hobby.