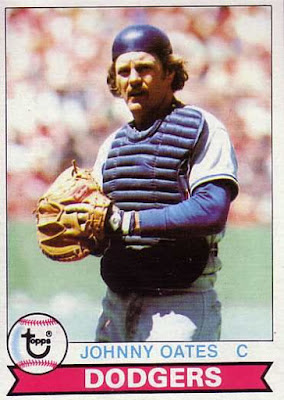 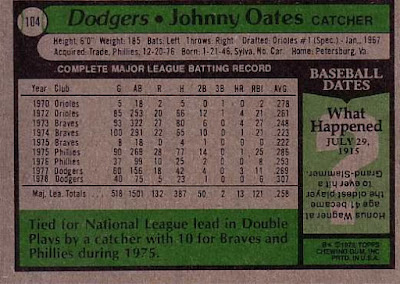 Card Front: It is always good to see the back up guys get their own cards. Johnny may have on the old school catcher's gear, but it looks good. From the simple but effective chest protector, to the flowing hair and moustache coming from under his backwards helmet it screams 70's. He definitely looks like a ball player, and not some robot that we see on some catchers today.

﻿Card Back: Eight years in the big leagues and you have seen four teams. Sadly two seasons saw less than 10 games, and only one time did Johnny play more than 100 games in a season. Topps says he was 6 feet tall, but when he was a manager, my wife and I both remember him as "little Johnny Oates." In 1915, a 41 year old Honus Wagner hit a "Grand Slammer", I like how the name has slowly changed in the baseball community.

Six degrees or less to Seattle: In what would be John's first full season in the big leagues with the Orioles in 1972, Johnny would spend time with Don Baylor. Later, before both players would manage, Don moved on to be part of the Boston Red Sox in 1986, another of those Sox was a young Roger Clemens. Toward the end of his tainted career, Roger played on the 2007 version of the New York Yankees. Another part of that Yankees team, with his high price tag, and checkered past was Alex Rodriguez. Alex gained fame in Seattle, and saw time from short stints in 1994 and '95, thorough the end of the 2000 season before heading to Texas for the big money.

Blog related to the team: If you have ever read a few blogs about baseball collectibles, cards, or any other good stuff you know there are lots of Dodgers fans. I know of one that writes his blog about his True Blue love affair. He can show you autographs, stuff you didn't know about, or his specialty-- DodgerBobble. I know he has been around for a long time, and he will travel to just about anywhere in Southern California to get his bobble head, or autos and I love reading about the successes. Go look for  yourself.

that's one of my favorite Dodger cards.

as you said, it just screams old school backstop and not robocop.