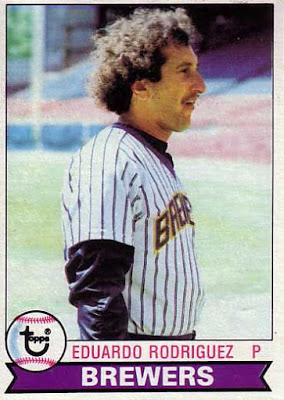 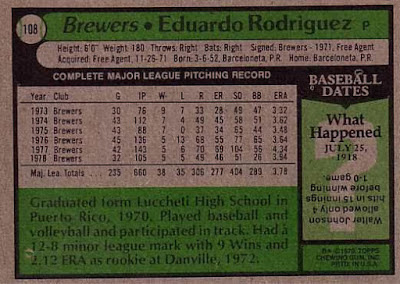 ﻿Card Front: Here is Eduardo. If you kids didn't know, Eduardo is cool. Just look at the guy. To have an almost afro, wear a rubber jacket under your uniform, and do it all Milwaukee you must be a bad ass. I do find it odd that the way the sunshine off the blue in the Brewers uniform almost matches the purple banner below Eduardo's awesome profile shot.

Card Back: Little did us kids in 1979 know we were looking at Eduardo's entire career stats with the Brewers. In February of 1979 he was bought by the Royals to play in 1979 and retire at the age of 27. Relievers were used very differently in those days. I mean anywhere from 32 to 45 games and 105 to 143 innings, nowadays guys are pitching to a batter, or maybe one inning.

Six degrees or less to Seattle: While Eduardo spent only his 1979 season in Kansas City as a Royal, he did have Frank White in his infield. If you look to the 1989 version, Frank was still in the infield in Missouri, but now he had Bret Saberhagen on the mound. Later in his career, Bret would take the mound as a 1999 Boston Red Sox. Another of those Beantowners was Derek Lowe. Derek saw 12 games of service in Seattle before being dealt with Jason Varitek in 1997 for Heathcliff Slocumb.

Blog related to the team: I still wonder what would have happened if the Pilots would have never been taken off to Milwaukee by the now commissioner to become the Brewers? One guy I'm sure that couldn't care less is also a Brew Crew fan. While we have heard much from him in a long time, I'm hoping we can maybe rile him out of hibernation, and give us some new posts. When I first started reading blogs, one of the regulars was Sharpe Since 92. He has only given us one post this year, but maybe we can get him back since I used to really enjoy his work.

Ol' Eduardo looks like he should be standing in front of an easel with a paintbrush in his hand. Cool picture, I don't believe I had seen this card before. Good to see you post again.