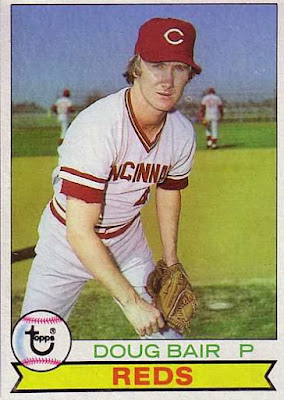 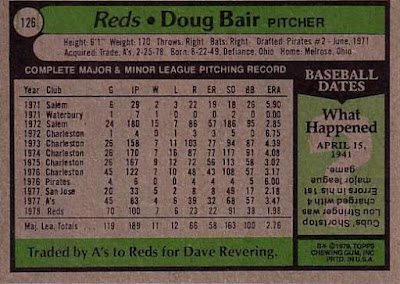 Card Front: Here we see Doug doing the standard pitching pose for a spring training shot. He was early in the start of a long major league career that would have see the dugouts of many teams. I wonder what his teammates in the background walking away are thinking of Doug right now....

Card Back: It is pretty obvious that Doug took the slow road to get to the big leagues. After being drafted in 1971 he saw 4 games at the end of 1976 before being dealt to Oakland, only to land in Cincinnati. Doug would travel well, playing for seven teams in 15 seasons including St. Louis twice and Pittsburgh to bookend his career start and end.

Six degrees or less to Seattle: Doug did spend a few seasons in the Queen City. While a member of the 1980 season in Cincinnati, Doug played with Bruce Berenyi. Bruce would eventually hook up with the World Champion version of the 1986 New York Mets with every one's teammate in Jesse Orosco. Jesse being the ageless wonder that he was would be part of the 2003 San Diego Padres with little known catcher Wiki Gonzalez. Wiki was part of a six player dealer to come to Seattle to see time in 14 games behind the plate during the 2005 season at Safeco Field.