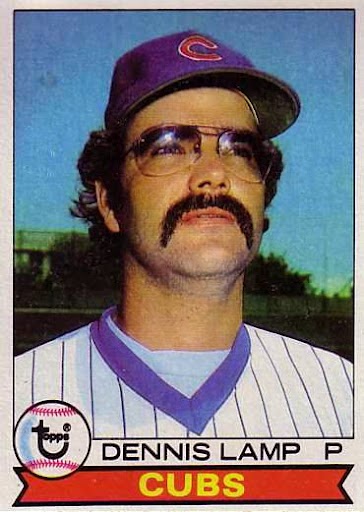 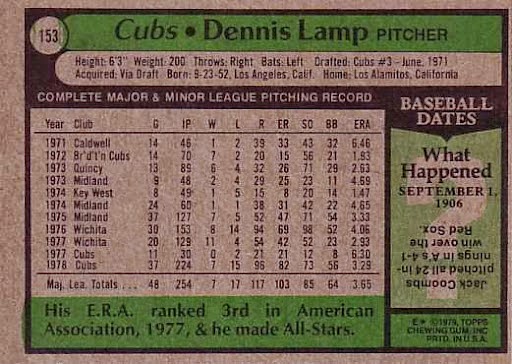 Card Front: For a card with a posed shot there is so much right and so much wrong here. You have to love the simplicity and beauty of the Cubs hat and the always appealing look of pinstripes and a V-neck pullover of the 70's. The red of the Cubs banner goes well with the color scheme. I do have to admit though that the large moustache is a bit of a scary thing to most women and children. I don't know about you but when I see Dennis' glasses I think of Kelly Leak fro the Bad News Bears.
Card Back: Dennis is definitely an example of the tale of the tortoise and the hare. For him getting to the big leagues was definitely a story of slow and steady wins the race. Drafted in 1971 and finally six years later he finally got his shot. I love how in 1906 Jack Coombs could pitch all 24 innings of a game. If that was today he would be lucky to go 7 or 8 innings with today's pitch counts.
Six degrees or less to Seattle: Dennis was a guy who would last a long time and see many cities in his time. Dennis would be up north in Toronto with the Blue Jays in 1984 with Mitch Webster. It wasn't the other Mitch Webster that Toronto fans would love in 1993, but yet the extra outfielder Mitch. In that same season of 1993 Mitch had moved and was with the Los Angeles Dodgers. After seeing time in only two games the year before, Pedro Martinez was a member of that Dodgers team also. Pedro as we all know had a long career and was part of those winning Red Sox teams. But, in 2009 he was in Philadelphia with the Phillies. Another young pitcher in the city of Brotherly Love was J.A. Happ. While he hasn't seen a game yet in Seattle, he was part of a trade that just brought him to town and will be part of the 2015 Mariners.
Next Card: #154 Jim Gantner, Brewers
Posted by Mariner1 at 6:35 AM