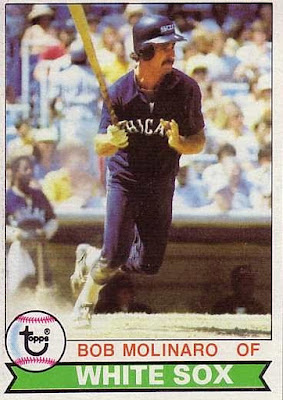 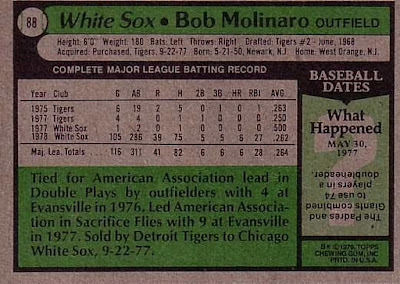 ﻿Card Front: ﻿Bob looks like he might have gotten a hit, or did he just ground out? It is good photography to get the dust from his foot in the shot. It look like the Sox were on the road in the Bronx for this picture. I don't know why but I still kind of like the old uniforms with the collars they wore. I can't tell if Bob is wearing batting gloves or some kind of leather work gloves, they look awful strange there.

Card Back: It is amazing that a guy that had only been given 11 games experience in the big leagues got that much time all of a sudden. Granted, most of his time in '78 was at DH since the Sox brought in a hot shot outfielder named Claudell Washington. Bob did spend almost all of 1979 in the minors before being claimed by Baltimore and getting into a few games for the Birds in '79. Wow, 74 players used in a double header tells me they must have been long games...

Six degrees or less to Seattle: Bob only had a total of about 400 games in his career, but he did bounce to a few teams. During his few games with Baltimore in 1979, Bob was on the field with Tim Stoddard. Fast forward 10 years to 1989, and Tim would be a Cleveland Indian with Rudy Seanez. Rudy would stick around for an eternity to make it on to the 2008 Philadelphia Phillies. Another guy on that Phils team was Greg Dobbs, who saw limited playing time with Seattle in 2004, 2005, and the 2006 seasons.

Blog related to the team: The South Siders just won the World Series 7 years ago. You would think they would have a ton of bloggers. One guy that isn't afraid to fly his White Sox flag if Jeff. You might know him better as the author of My Sports Obsession. I could take or leave his baseball and football teams, but Jeff is a man after my own heart since he is a Michigan Wolverine fan(GO BLUE!!). If you have some extra White Sox, Colts, Wolverines, or 1981 Topps laying around get with him and help him out.

Thanks for the love.