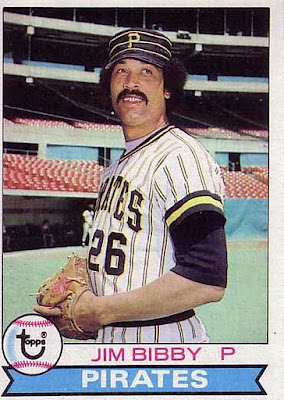 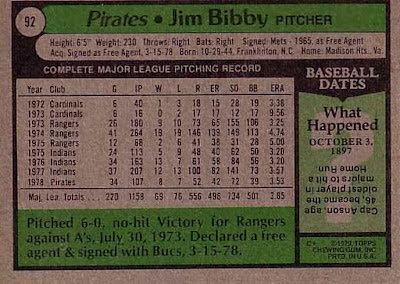 ﻿Card Front: Here is Jim in all his pinstripe glory at Three Rivers. It is funny to see no one in the stands at all, but you can find people in the dugout. I wonder if something caught Jim's eye or if the cameraman thought it would look cooler on his card to look away.

Card Back: It is sad to see that until coming to Pittsburgh, Jim played with some not so good teams. It is cool that Jim threw a no hitter in 1973 and would also give up a lead off hit but then throw a perfect game in 1981. Jim would coach for quite a long time after retiring in 1984, but tragically lost a battle with bone cancer in 2010.

Six degrees or less to Seattle: During Jim's All Star season of 1980 as a Pirate, he would have a young catcher names Tony Pena. Tony would play many years in the Majors including a stint with the 1997 version of the Houston Astros with Jose Cabrera. Jose would stay in Texas and in 1998 would share time in the Astrodome dugout with John Halama. John was the PTBNL that sent Randy Johnson to Houston in 1998 because Mariner management thought the Big Unit was done and wouldn't pitch much longer. John was a Mariner from 1999-2002.

Blog related to the team: I'm really having a hard time finding my Buccos fans. I would think with them playing so well that maybe they would become more well represented. I decided let's see what other bloggers that have done set blogs think of Jim's cards. There was a blog for Jim's first card as a three player rookie for the Cardinals in 1972, but Jim's card was never written about. Mr. Bibby missed out on having his own card in 1973.  We would find that wobs would write about Jim and his 1974 card with the Rangers. In the far out 1975, night owl showed us Jim as a Ranger again. We would Jim in Cleveland thanks to Matthew in his 1976 version. Matthew hasn't gotten to Jim in 1977, and there was a 1978 blog, but they never got to Jim either.

Jim Bibby. I recently opened up one of those 100 card "jumbo" packs (the repackaged fairfield jobbers) that "promise" 3 "vintage" cards. Well my 3 vintage cards were two Manager cards from 1978 (Earl Weaver Orioles and Joe Altobelli Giants) and the 1979 Jim Bibby card. I needed them, except the Weaver card I already had one. Those jumbo packs are fun to open and if you need 90s to current cards are great, but their "Vintage" doesn't go back too far. 1977 I think is the oldest I've gotten, maybe a 1976.