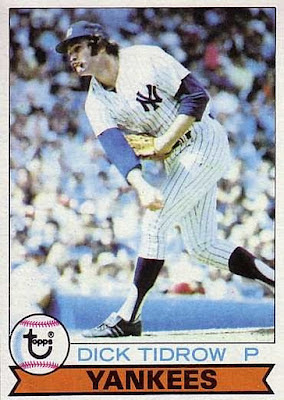 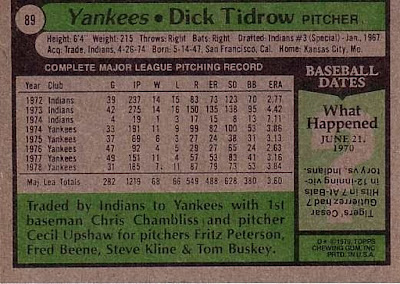 ﻿Card Front: If you were in the batter's box would you want that mug throwing at you? I've always thought the look on Dick's face on this card scared me. With that violent arm follow through, and the pushing of the lips out to point that moustache at you is creepy. I must give high marks to Dick though for the awesome stirrups and the low key Adidas shoes before they were cool.

Card Back: The drafting by the Indians in 1967 was the 4th time Dick was drafted. Look at those IP's in his first two years, 237 and 275! I think the players that came to New York worked out better than for the Indians. This would be Dick's last Topps card in the pinstripes as he would be sent to the Cubs in late May of 1979 for Ray Burris, but Ray would be released in August of that same year only to go to the other NY team.

Six degrees or less to Seattle: During what would be Dick's last season in 1984 with the Mets, Dick would be along side Calvin Schiraldi. Fast forward four years to 1988, and we find Calvin as a Chicago Cub along with Dave Martinez. Eventually, Dave would take his talents to the other Chicago team and in 1996 would wear White Sox. Another of those 1996 White Sox was Jeff Darwin. Jeff saw action in 2 games in 1994 with the Mariners for a whole 4 innings giving up 6 runs and having a 13.50 ERA as a Mariner.

Blog related to the team: How can there not be like 9 million fans of the most famous team out there? There probably is more than that many fans who love the Yankees. Does any body know where I can find one that also loves baseball cards, Star Wars, and playing the bass guitar? I know where he is, and his blog has that play on words: Bass on Balls. While he's only been n the blogging world for a few months, I have to say I'm hooked. Go over and check him out and show some musical pinstripe love to him.