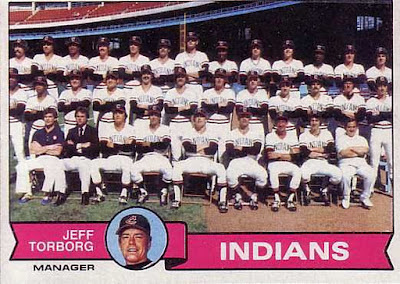 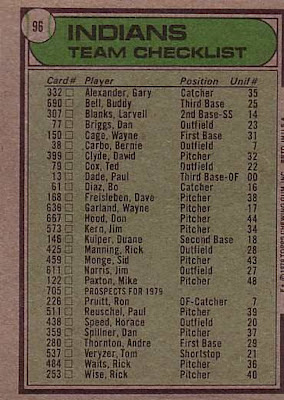 ﻿Card Front: Boy oh boy, doesn't this look like a happy bunch of Indians? Is it the continuous losing seasons or the great Mistake by the Lake? You do have uniformity with everybody having their arms crossed, but some guys are looking off to the right, some smiles, and bad cropping of half the guy on the far left. I must know why Jeff has an old wishbone C hat in the little photo, while the team picture has everyone in the block C caps? The two different polo shirt guys, and Mr. suit and tie not happy to be in the picture just make this fun!

Card Back: As far as Mariners go, it is pretty slim pickings on the back of this card. The only guy that would actually don a Mariners uniform was Ted Cox. Ted was in Seattle for the blink of a eye during the 1980 season. I guess except for a few guys, the Tribe was pretty bad back then.

Six degrees or less to Seattle: Jeff Torborg had a playing career in Southern California. During his time as a member of the 1970 Dodgers, Jeff played with Don Sutton. Fast forward to 1983, and Don is part of the Milwaukee Brewers with HOF'er Paul Molitor. Paul would take his travels to north of the border to be a Toronto Blue Jay in 1995 with Giovanni Carrera. Giovanni spent the 2003 season in the Mariners bullpen.

Blog related to the team: It really is becoming harder to find blogs for teams. Some have thousands of bloggers that are fans, and some are like me. Lone  voices rooting for an empty team that seems to flounder. The only new one that had a post or two about cards was called Cleveland's Rocks. They do talk about all three of Cleveland's teams but there is some stuff about the Tribe.