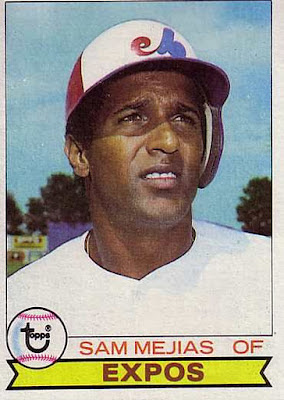 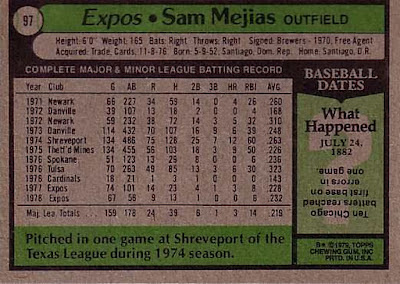 ﻿﻿Card Front: Kind of a boring front to a card. We get a nice tight close of Sam in his batting helmet. The great part is the beauty of the Expos logo on the front. It is too bad you can't make out the advertisements on the wall in the background. If you could find one, how much would you pay to own an old white or powder blue Expos jersey? I wonder if the Expos wouldn't have left Montreal for DC, would they be as successful as they are this year?

Card Back: It took two organizations before Sam had a shot at playing time in Montreal. Milwaukee and St. Louis didn't think much of him, the Expos took a chance but this is another of those cards that the guys was traded in the 1978 off season, going to the Cubs. Not only did Sam pitch in 1974, but also for the Expos in 1978. He finished a 9-4 loss to the Mets on 9/7/78 facing 4 men with a HBP, two ground outs and a fly out.

Six degrees or less to Seattle: Do you remember Sammy being Lou Piniella's 1st base coach for the Mariners from 1993-99? I do, but  if you aren't an M's fan or historian like I am you forgot. During Sam's first year in Montreal in 1977, he played with Tony Perez. Tony would go back to Cincinnati in 1986 to team up with John Franco. John being a man of many hats would eventually find himself on the 2001 version of the New York Mets along with Desi Relaford. Desi would come back to the Mariners for the 2002 season. Desi was drafted by Seattle in 1991 only to be sent to the Phillies for Terry Mulholland in 1996, and came back from the Giants for David Bell before the '02 season.

Blog related to the team: Now that the Expos are a team of the past, it is surprising there aren't more people out there wanting to own the history of the bleu, blanc, and rouge. The team did produce many players that would be big stars in the big leagues. One man that is a big fan of a guy that made his debut in Montreal in 1980 in Corey. If you have never seen his blog about Tim Wallach Cards, you must go there and see some of his beauties. If you have extra cards of his favorite player, hit him up and help him collect them all!!