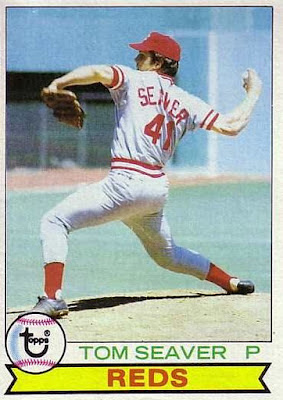 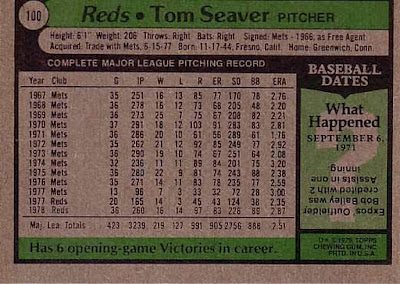 ﻿Card Front: Finally Topps decides to give us some "action shots." While I like being able to see Tom's form with the left arm bent down, and the right arm in good from not to blow out his elbow. I'm going to take a wild guess and say with the road grays and all the green on the walls that we might be looking at Three Rivers in Pittsburgh? ﻿I don't get how a yellow banner works with the Reds color scheme though.

Card Back: Just look at all those career stats that would lead to Cooperstown! That is a model of consistency always in the mid 30's in starts and mostly all in the 2's in ERA. Of course the trade from the Mets in June of 1977 was part of the famous "Midnight Massacre" when the Mets traded everybody. Is it cool or creepy to see the day you were born on the back of a baseball card? Not only did Bob Bailey have those assists on my day, but he also did it in a game against Tom and the Mets in Montreal.

Six degrees or less to Seattle: If you decide to look ahead to Tom's final season in the Queen City, you will find that that 1982 also included Charlie Liebrandt as a Cincinnati Red. Charlie would move down South and in 1990 be part of the Atlanta Braves with a young player by the name of John Smoltz. During the final season of Smoltzie's soon to be Hall of Fame career in 2009, John was a Cardinal in St. Louis with Josh Kinney. Josh has spent time in the Mariners bullpen during this 2012 season.

Blog related to the team: There is a very happy Reds fan out there right now. His team recently punched their playoff ticket for this year, and yesterday Homer Bailey throws a no hitter for the Reds. I would like to introduce you to TheHitKing who writes for us at Spoke Bait and the Game. All you have to do is read the man's bio and how could you not admire him. I appreciate the fact that he is like me in loving a team that doesn't get much love from the media unless they are doing something great. Go over and read his stuff, and make sure to thank him for his service to our great nation!

Great blog, thanks much, keep up the good work. Just curious, you noticed how the fonts for the 1978 stats were off centered from the previous years stats? I wonder what the story is with that. Seaver was an awesome player and this is a good card of him.