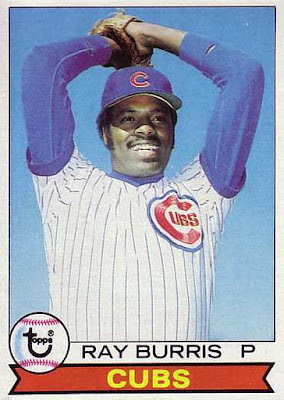 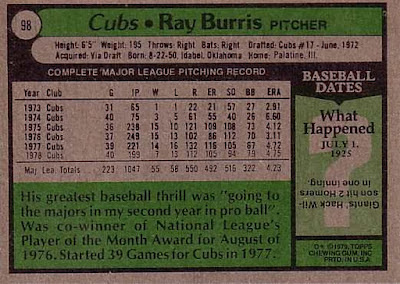 Card Front: I can't decide if Ray is more happy to be at spring training or playing for the Cubs. It is great to see a player that can have a smile for there card. I'm really not sure how Topps expects to believe he is going to throw with no ball in his hand though. I do like the fact that the Cubs have kept the hats and uniforms simple and classic looking after all these years.

Card Back: These stats would almost sum up Ray's career with the Cubbies. In May of 1979, he was dealt to the Yankees. Ray would not see another season of 10+ wins except for his 1984 season in Oakland. I would have to agree with Ray that it would be a thrill to make the majors in your second season. Ray have been a pitching coach for the Erie Seawolves for the past five seasons.

Six degrees or less to Seattle: During Ray's breakout 1975 season, he would share the Wrigley mound with Rick Reuschel. Rick would make his way all the way to the 1991 San Francisco Giants to play with Royce Clayton. Royce would find himself in the thin air of Denver to be a 2004 teammate of Denny Stark. Denny spent a brief stint in 1999 and 2001 with the Mariners. He would return for a brief time in 2009 before deciding to hang it up from baseball.

Blog related to the team: There are many Cubs fans out there. I feel there pain of continuing to watch losing baseball. I think it would great to see the North Side be relevant again baseball. There is a blog that's been around for a bit but is newer to me and I like that he is keeping the faith. When you were younger, how many of you had a Blue Batting Helmet? I'm sure Sirrahh who writes the blog did, and probably does still have one. I like his ever expansive things to write about and keep us coming back for more. Keep up the good writing, and go give him a look.