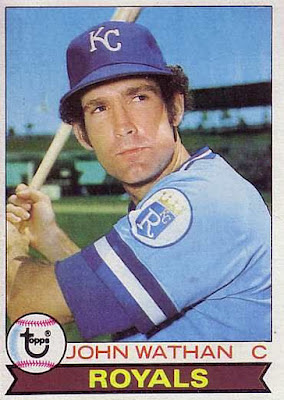 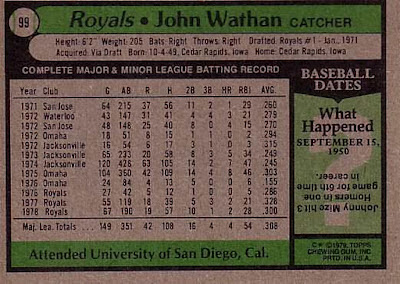 ﻿Card Front: OK, look to the right like you are hitting and give the pitcher a serious look. I can only imagine what the cameramen had to say to these guys back in the day to get some of these poses. John does look good with his long sideburns, small afro, and sweet powder blue KC uniform, but he really needs to wax those eyebrows and get them under control.

Card Back: How can you not love a card that shows a guy's entire professional career stats on it? It seems like the first two years were a bounce in A ball, then holding steady in AA, before going to AAA, and finally a shot with the big club. I wonder if John was given a full scholarship to go to USD since it seems strange for a kid from Cedar Rapids, IA to go to school in San Diego. If you are in school in SD, why didn't the Padres take a shot on him??

Six degrees or less to Seattle: John spent many times against the Mariners but only could fare a .228 average against us. Near the end in 1984, John worked with Danny Jackson on the Royals mound. Fast forward to the the 1992 playoff heartbreak version of the Pittsburgh Pirates to find Danny teaming with a skinny Barry Bonds. Barry would go on the cheat his way to records, and one of his 2006 San Francisco Giants teammates was Jason Ellison. Jason saw 67 games after a April 1, 2007 trade from the Giants only to be waived in early August and ending up in Cincinnati.

Blog related to the team: Do you like creative? Do you like to see things from today put into historical context? I do, and I know there are many out there who do customs. One of the best, and long standing makers of custom cards, is also a Royals fan. My blogging friends, I introduce to you Dave of Goose Joak. If you have never seen his work you need to take an hour or two and look through all the great stuff he has done. Tell him what you want to see, and he can do it up for you and tell him I told you to come by and see him!