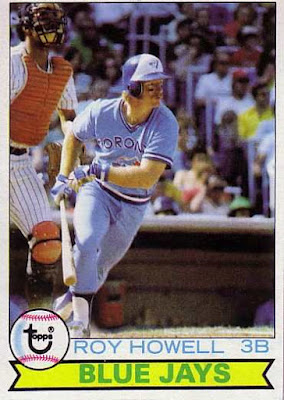 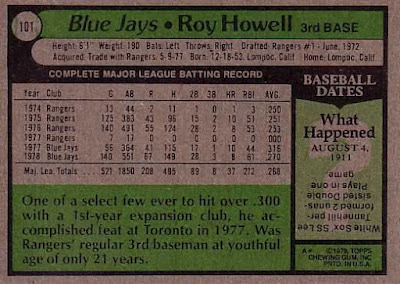 ﻿Card Front: There is just so much goodness going on here. As we can all tell it is taken at Yankee Stadium during a day game. That definitely isn't Thurman Munson behind the plate, but I think it is either Ellie Hendricks in 1977, but most likely the 6' 4" Cliff Johnson in 1978. I personally have always loved the baby blues that the Jays used to rock in the 70's and 80's. I know it's all changed, but wasn't the Yankees and their orange chest protectors and knees on the shin guards kind of iconic?

Card Back: Roy has going along just fine in Texas after getting a late 1974 call up. While he wasn't a big bat by today's standards he was there. Then in 1977, the Rangers had Toby Harrah to play 3rd, and Roy was out to Toronto. The fact of hitting .300 for an expansion club I think is a little skewed since Roy only got into 56 games for 364 AB's. Regular 3B at the age of 21, and traded away not long after turning 23 has got to be hard to swallow.

Six degrees or less to Seattle: During Roy's first full year playing 3rd base for the Rangers in 1975, one of his fellow Rangers was Mike Cubbage(with that name he should be in Chicago). In the strike shortened season of 1981, Mike was a part of the New York Mets with a young man that would last in the big leagues forever in Jesse Orosco. Finally at the age of 46, and playing for three teams in 2003 Jesse saw time in 1252 games and shared the mound in San Diego as he and Oliver Perez were Padres together. Oliver signed as a free agent and spent 2012 in the Mariners bullpen.

Blog related to the team: Is it just me, or are there just not enough fans of the teams from the north? It is not easy to find fans of the former Expos, and I have been able to track a few of the only Canadian team left. One of those that's out there and giving us great stuff on the Blue Jays tells us the virtues of the Tao of Stieb. I remember Dave Stieb as one of the first Jays I knew and liked. The two writers of the blog give you good info and insight to the players and the team that proudly represents the Maple Leaf. Go and see what they have say, and read up!

The Tao tells it like it is...one of the best Jays blogs out there for sure.