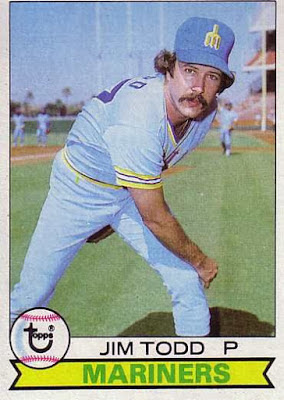 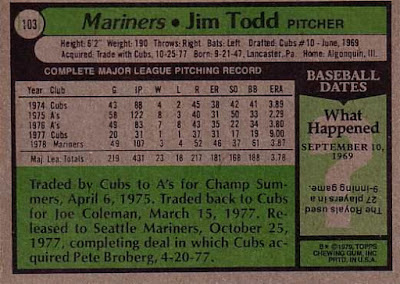 Card Front: Here we have Jim doing his best to show off the beauty of the Mariners road blues from the 1978 season. With the sunny day in Oakland, you kind of lose where Jim is, and the sky. I do have to say ﻿that the big bushy moustache, and long wispy hair coming from that super high pitchfork hat just screams late 70's. If the teammate over his left shoulder isn't careful Jim may take a throw to the back of the head.

Card Back: You know you are trade fodder when the back of your card tells more about your trades and moves to other teams than there is stats for your big league carer. Because Topps used to create these cards so far in advance and there was no Update set like today, you would never know that Jim was released in February of 1979, only to go back to the A's and be there in 1979. The Royals must have been awful lousy to use 27 guys in a nine inning game back in 1969!!

Six degrees or less to Seattle: When Jim first got to the show with the Cubs in 1974, there was a young 3rd baseman named Bill Madlock who played with him. Before Bill got to Pittsburgh fame, he was a part of the 1977 San Francisco Giants. Another of those Giants from that year was Marc Hill. After spending his time in Orange and Black, Marc would move to the south side of Chicago to play for the White Sox with Bobby Thigpen in 1986. Bobby would ride off into the sunset in 1994 with the Mariners, seeing 7 2/3 innings in 7 games and going 0-2 to finish his big league career.

Blog related to the team: I can honestly say it is lonely being a Mariners fan. Not many people will admit to being able to root for this team. We have been pretty bad for a long time. One man that may not root for them, but I'm sure has picked up his fair of Mariners cards buys his Sportscards From The Dollar Store. While it is a newer blog, I have totally fallen in love with the cards that he is finding in the cheap stores and showing off to us. Go head over to see what can be found on the cheap. and maybe you should head out and get some inexpensive cards of your own!!