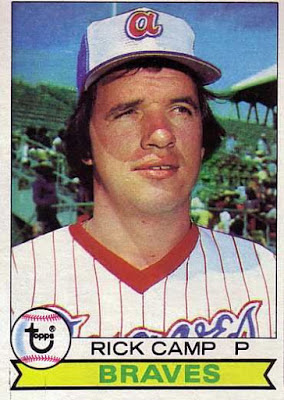 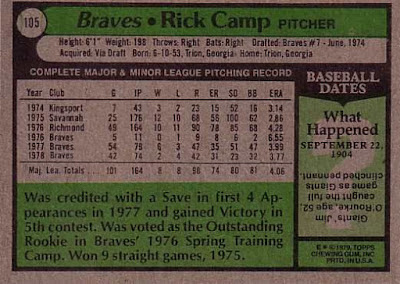 ﻿﻿Card Front: Does this card just scream 70's or what? There is just so many things to laugh at. Between Rick's high top mesh cap to the longer hair, even the fans in the background look like turn back the clock. I wish I could remember the Braves wearing the pinstripes, I think they look good but I like the cleaner look of today' uniforms. Why is Rick looking off to his left? Is there some kind of rare West Palm Beach bird he sees?

Card Back: How about that? Grow up in Georgia, go to college in Georgia, and then your hometown team selects you in the draft. That is what dreams are made of boys and girls. Two full seasons in the minors and you get a late call up. Rick would spend his whole career with the Braves through 1985 before being released in 1986. Sadly, he was convicted to 3 years in a Federal Prison in 2005 for conspiring to steal $2 million. He did hit a game tying home run in the early hours of July 5, 1985 only to see the Braves eventually lose, but it is the one few memorable hits he had.

Six degrees or less to Seattle: During Rick's 1977 season in Atlanta, he was a Brave along with Eddie Solomon. Eddie would than takes his talents to Pittsburgh, and in 1980 be a Pirate with young Tony Pena. Tony would move around quite a bit, but would be part of the 1997 Chicago White Sox with Magglio Ordonez. In 2011, Doug Fister was traded to the Detroit Tigers and was a teammate with Magglio. Doug spent 2 1/2 seasons from 2009-2011 with the M's before a bad trade that got us nothing, but got Doug to the World Series in 2012.

Blog related to the team: I love teams like the Braves. How could we all not be some kind of Braves fans back in 1980's. We were all starting to get the SuperStation WTBS in our homes and watching baseball every day. One guy that isn't too far away from me geographically, is a big Braves fan. He does a great break down of cards with his tomahawk on The Card Chop. Give a west coast Braves some love and go over and read up!!

Thanks for pimpin' my site, bro. I remember watching that game when Camp hit the homer. I was in high school and some buddies and me were finishing off a long evening of partying. Sober and I would be excited; too many beers, and I was going nuts.