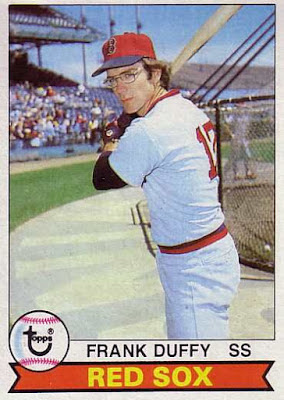 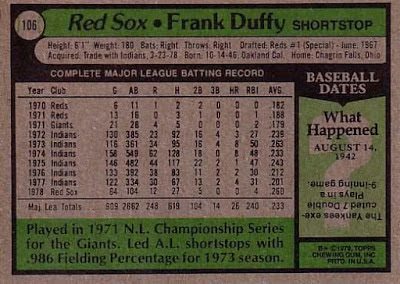 ﻿Card Front: Here we have Frank in all his posed glory on his swan song card. I would think that for a pitcher seeing him come up to the plate wouldn't all that intimidating. You have to love the simplicity and style of the classic Red Sox uniform including the iconic red hats. I can't tell if this is a Spring Training shot from Florida with two decks, or is it a stadium that I can't quite figure. Does anybody know the answer??

Card Back: I guess these would be the proto-typical numbers of a SS back in the 70's. There was a time when you could get away with that if you could play the field. Nowadays they are big and put up big stats. Frank left Cincy in a trade for a cog in the Big Red Machine in George Foster. He left the Giants with Gaylord Perry to head to Cleveland. Frank saw time in 6 games with only 3 AB's in 1979 before being let go on May 22, 1979 and was done with baseball.

Six degrees or less to Seattle: In the middle of Frank's productive years in Cleveland, one of his teammates during 1975 was Oscar Gamble of Afro fame. As Oscar would continue on in his career, he would team up with Dennis Rasmussen as part of a forgettable 1984 New York Yankees team. Dennis would keep plugging along in his career to be part of the 1995 Kansas City Royals with a September call up at Catcher in Mike Sweeney. Mike would wind down his career in 2009 and part of 2010 with Seattle before a quick stop in Philly, and hanging it up after the 2010 season.

Blog related to the team: It was a rough season for fans of the Sox in 2012. What should have been a celebration with the 100 years of Fenway was a nightmare. But I know that their fans are a proud bunch and never give up on their team. One guy that sometimes is quite a poster, does kind of go into hiding sometimes too. One thing he doesn't hide is his love of Boston sports teams. You might know him as Offy. You might have known and read him as The Sports Syzygy. It's been awhile since we've gotten new stuff from him, so I hope we can bring him out of hiding.