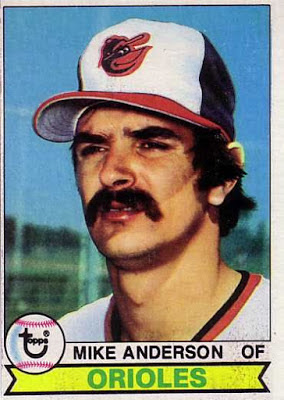 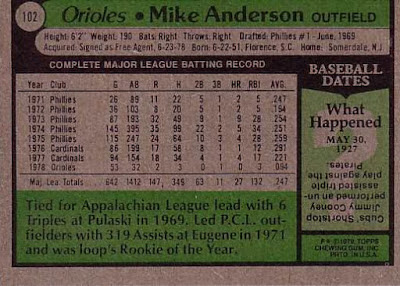 ﻿﻿Card Front: Thanks for this thing of beauty Topps. Are you telling me that some time in the last months of the 1978 season you couldn't get down to Baltimore to get some king of picture of Mike in Orioles gear? The airbrush job on Mike's hat is awful. The bird isn't smiling, he almost looks like he's unsure. Mike even looks like he was aged by the airbrush to look older.

Card Back: I guess that looking at Mike's numbers, he was more of a defense first guy. While none of his stats in either Philly or St. Louis were off the charts, those Orioles numbers absolutely horrendous. I guess the only positive from an .094 average is that you had as many RBI's as hits. Jimmy Cooney of the Cubs, never heard of him but unassisted triple plays are awesome to see.

Six degrees or less to Seattle: During Mike's second and final season as a Redbird in 1977, he spent time playing along side Joel Youngblood. Joel decided it was time to go out west , and in 1987 was a San Francisco Giant with Candy Maldonado. Candy decided he needed some foreign time and in 1995 was with the Toronto Blue Jays, and being teammates with Paul Menhart. Paul would come to Seattle for the 1996 season in a minor deal of players. Paul did see 11 games for the Mariners.

Blog related to the team: Do you know Bob? I'm sure you know a Bob, there are many out there but this man is Commishbob. He is multi talented and has more than one blog. Today he is proud to show us the joys of being The Five Tool Collector. He's kind of like me in that we like the same things but different teams, and decades. I have really found this blog to be a joy to read. It is well written, and always is giving me something new to look out. How could you not love that his avatar is being used by the O's in their postseason run this year!! Go see him and read up on some fun stuff.

I spent most of the summer of '78 in Baltimore. So I'm sure I saw Anderson play but other than having this creepy looking card I remember nothing about the guy.

He got two hits in one game and that raised his average to .103 (for a game or two).

And thanks for the shout out, btw.

It's what I like to call That's just Topps being Topps.

Compared to some of the hack jobs that Topps was turning out just a few years earlier with Toronto and St.Louis caps... this is actually a pretty decent airbrushing job.