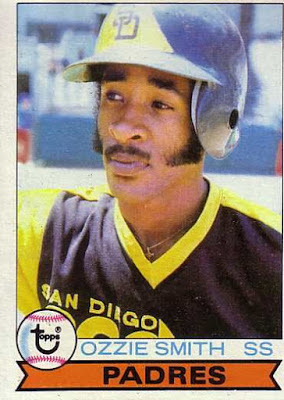 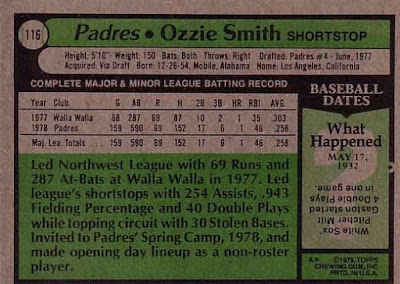 ﻿Card Front: Welcome to the most celebrated Rookie Card of the 1979 set. There are just so many cool things about the front of this card. Just look at Ozzie, he was so bad ass that he made the hat/helmet cocked to the side cool before we see it today. We all know that we wish that was some way we could wear those sideburns and cool like Ozzie instead of looking like a dork. The Padres jerseys of '78, how many other teams have had city and team name on their jerseys?

Card Back: That's what a RC should look like on the back. One line of minors, and one of majors. You can tell the Padres saw something out of this kid coming out of Cal Poly San Luis Obispo. One year in short season rookie ball, and the the next year he makes the team as a NRI. Who would have thought is would lead to a Hall of Fame career that would last through the 1996 season. I would say it safe to say Ozzie was the star in Walla Walla in '77 since only he and three other guys would make the majors, but none with his impact.

Six degrees or less to Seattle: Ozzie only would ever have two homes, one in San Diego and the bulk of it being in St. Louis. During his swan song season of 1996, Ozzie was a Redbird with Mike Difelice. Mike would make his way to the Motor City, and be a member of the 2004 Detroit Tigers with Ryan Raburn. Ryan would stay in Detroit, only to be a part of the 2009 Tigers with Ramon Santiago. Ramon had been a Tiger before coming to Seattle in 2004 for Carlos Guillen. After seeing time in 27 games in '04 and '05 he was released and went back to the comforts of being in Detroit City.

Blog related to the team: Where have all the Friars fans come from lately? There used to be two Padres bloggers but not much else. Now there are five that I know of, and maybe more that I haven't found yet. One of the guys that has burst on the scene since last year is Marcus. He was a guy that grew up with the Padres only to find himself in Texas. He writes about the All the Way to the Backstop Cards. He is always putting out good posts, and if you've never done a trade with him you are missing out. He's heading on trip but give him some love and catch up on some great Swingin' Friars!!

Love this card, it's hard to find a well centered

Thanks for the shout out Larry! Go Ozzie! Go Padres!