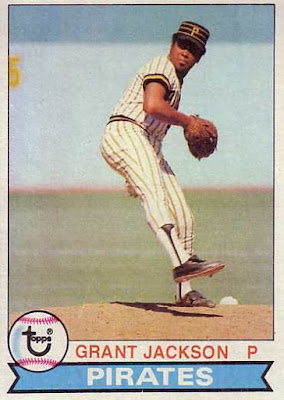 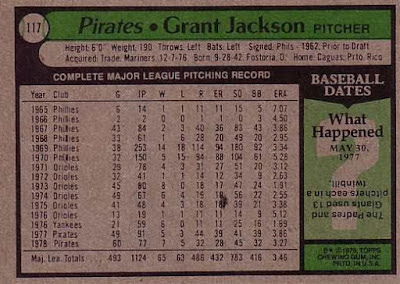 Card Front: Here comes a pitch from the lefty. There is just so much to love about the Pirates and their uniforms from this time. I once saw something on MLB Network that said the clubhouse guy had a running list of combos so they wouldn't repeat them soon together. I like the way the blue walls of Three Rivers go with the blue banner below Grant. I love the black flattop hats, but wish they would have worn the yellow ones a little more...

Card Back: That is one big fat stack of stats there. Back then it sounded like a long time ago to be signed in 1962, but now it was over 50 years ago! It seems the Phils had him start in 1969 and 70 but then decided Grant was more valuable in the pen. Unusual to see someone born in Ohio, but lives in Puerto Rico. It seems strange to see the Acquired line say Trade, Mariners in 1976, when they hadn't even taken the field yet. I guess Topps must have been searching for anything to put on the side with the fact that the Padres and Giants used 13 pitchers in a doubleheader.

Six degrees or less to Seattle: Yes, Grant was drafted by the M's in November of 1976 only to be traded to the Pirates in December so he never saw the field with a trident on his cap(see below to see Topps offering of Grant as a Mariner).  During Grant's only season in the Big Apple in 1976, he was a Yankee with Otto Velez. I think Otto liked Maple Syrup so he went to Toronto and was a Blue Jay in 1979 with a very young Dave Stieb. I still think of Stieb as one of the faces of the Blue Jays franchise. Almost 20 years in 1998, after a short stop as a White Sox?? for four starts and a four year absence from the game, Dave was on the bump in Ontario with former Mariner Pat Lennon. Pat was one of those thought to be a future star in the outfield with Junior, but Pat saw 10 games in '91 and '92 before being let go from Seattle.

Blog related to the team: Ahh, Pirates fans are becoming more common. I'm glad to see it. They are one of those franchises that has a great history but have suffered for a long time now. I know how their fans feel to have lesser ownership that doesn't give you a chance to win. I think the Buccos are on the right track and could have a really good year. One of those fans is from south of the Steel City but loves his team. You may know him ad BigDaddyFilth. He also goes by Victor, and he writes about Gravediggers, Mooses, and such.  Go and see his work, and maybe send some Pirates his way, and he will definitely help you back.