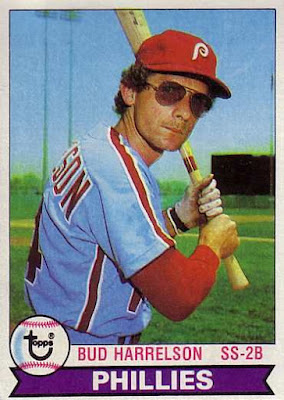 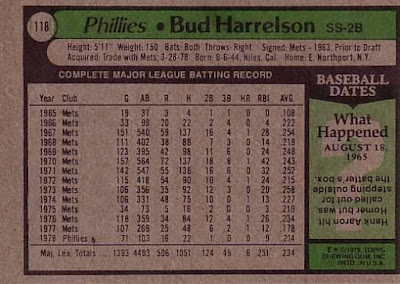 ﻿﻿Card Front: It is nice to see that Topps did their homework and got a picture of a player with his new team and didn't airbrush it. I have to admit that I wasn't a Phils fan back in the 70's and 80's, but I did like the mix of burgundy and baby blue. There is so much going on here. You have to love Bud and his Top Gun aviator glasses. Maybe it's the batting glove that looks like a golf glove, or it could be the choking up on the bat to get the little guy a hit.

Card Back: All you have to do is look at Bud's card and you would have thought he would have been a Met for life. I don't know who really won in the trade, since Bud only did 2 part time seasons in Philly but his trade partner last saw the Majors in 1976 an '77 and was never back up. Obviously Bud had a long career in the big leagues for his defense, because those stats are nothing to write home about. I would assume that he was the typical #8 hitter in front of the pitcher.Hank Aaron was called out for stepping out of the box. You see it quite often today, but it is never called.

Six degrees or less to Seattle: During Bud's long run in the Big Apple, he had many teammates come and go. During the 1973 season, Bud would play with John Milner as Mets. John would find fame and fortune in the Steel City. As a part of the 1982 Pirates, he would play on the other side the state from Philly and another of those Pirates was Junior Ortiz. Junior would catch many games, and was with a handful of teams, but in 1992 he was Cleveland Indian along with Reggie Jefferson. Reggie came to Seattle for the 1994 season with Felix Fermin in the trade that saw the Indians obtain soon to be HOF'er Omar Vizquel. The Mariners let Reggie go before the magical 1995 season.

Blog related to the team: So many Phillies fans out there. One blogger that has been at it for quite a while and does a great job gets the love today. How many of you read The Phillies Room? Jim is one of the authorities on all things Phillies related. He even does his own custom cards for the Phils. How about Twitter for a place to check him out? I say you must go to one or both today and see him, and tell him a ghost form the 1979 season sent you to see him.

Next Card: Don Stanhouse, Orioles
Posted by Mariner1 at 7:37 AM

Thanks for the shout out!

The specs are great, aren't they? I've got Bud and some other super cool dudes at: