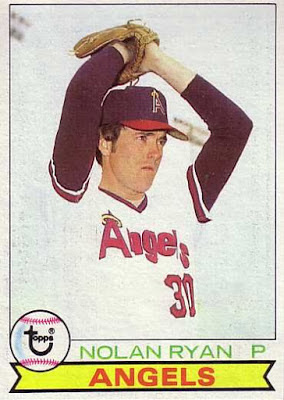 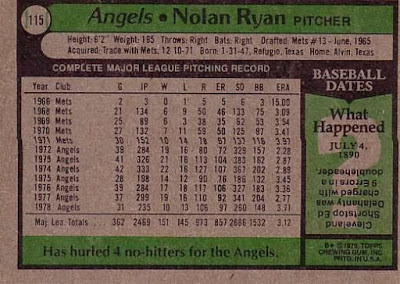 ﻿Card Front: How can you throw a pitch if you don't have a ball in your hand?? I personally would be scared to stand in the box against this guy even if he doesn't have a ball. Just look at the look on his face and tell me Nolan isn't just a bad ass. He has the stare down, he is rocking the classic Angels jersey and hat, and almost looks like he is an angel floating in the air. Topps definitely got it right with this one in 1979, I think it is one of the best cards we've seen so far!

Card Back: The back of this card is the stuff legends are made of. Little did we know that we would have The Express be around for another 15 seasons. If you look at his stats as of 1978, he was only part way to some of the staggering stats he would finish with. He was only half way on the win total, ONLY 2700 strikeouts so far and only about 3000 to go, and the four no hitters so far and on his was to 7 for his career. If you were a right handed pitcher back in those days, I hope you wanted to be like Nolan when you grew up.

Six degrees or less to Seattle: If you know your history, you know that Nolan's final pitch was in the Kingdome in Seattle. He came out of the game in the 1st inning after going 3-1 on Dave Magadan, and giving up a grand slam to Dann Howitt on September 22, 1993. Before that fateful day, while Nolan was a member of the 1983 Houston Astros, he played with Mike LaCoss. Mike would eventually make his way out west and and in 1991 would play in Candlestick Park as a part of the San Francisco Giants. Another of those 1991 Giants was closer Rod Beck. Rod would continue to pitch and in 2003, he was down the coast as a part of the San Diego Padres. One guys that played three games as a Friar before being traded in 2003 was Jason Bay. Fast Forward 10 years to spring training 2013, and Jason Bay is trying to make this year's Mariners squad.

Blog related to the team: It surprises me with the long sustained success of the Angels franchise that there aren't tons of people blogging about the Halos. One that I know has been out there for a long time gets his name from a player I remember well.  James is a dyed in the wool, unapologetic Angels fan and writes the great True Grich. I like to pop over and see what he is thinking about his team on regular basis. The Angels have always had a soft spot in my heart since they spent half their springs in my hometown of Palm Springs for spring training and I would watch Angel broadcasts so I could see them play my M's.

This is a terrific Nolan Ryan card!!! I may have to add one to my small Ryan collection.