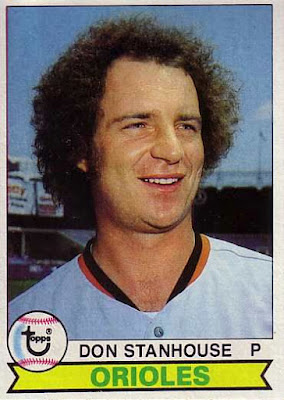 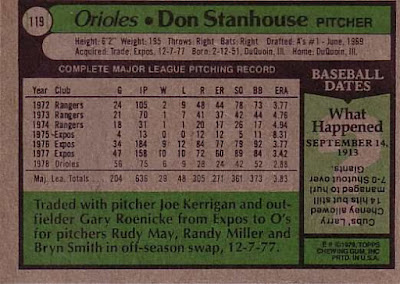 ﻿﻿Card Front: Ahh, good old Yankee Stadium on a nice sunny day. Don looks like he and a few of the boys just rolled out of the van after getting seriously baked! I guess maybe he is just smiling because neither you nor I have an afro as cool as his! You can see the beginnings of some massive 70's sideburns going but I don't remember Don ever growing them out. I'm not sure I like the no hat look though, it reminds me of this year's Heritage with all the forehead going on.

Card Back: It seems that neither the Rangers or the Expos could decide if Don was a starter or a bullpen guy. I remember Don form the 1979 World Series but not much else. I know he was in the game a long time but kind of gets forgotten about. He was traded with some recognizable names from Montreal to Baltimore. Don must obviously be comfortable in DuQuoin, Illinois since he was born there and is still listed as his home. I think they could have given us Don's minor league stats too, but I wonder if Topps had a rule that if a guy saw more than 5? seasons in the majors that they left off the minors numbers?

Six degrees or less to Seattle: During Don's rookie season with the newly relocated 1972 Texas Rangers, another of those guys new to Dallas was Jim Mason. During that magic season of 1979, Jim was part of Les Expos de Montreal with Scott Sanderson. Scott was a guy that was here, there, and everywhere during his long career. One of Scott's stops include a turn with the 1994 strike shortened version of the Chicago White Sox. Another young player on that team was Warren Newson. Warren came to the Mariners in July of 1995 for Jeff Darwin. He saw some time in the black hole of Seattle: Left Field and was a pinch hitter. He was let go after that one season.

Blog related to the team: I really hope the Orioles have another good season. I think it will continue to bring us more bloggers that love the Birds. I'm still jealous that they stole Adam Jones away from us, but I do love the look they went back to last year with the iconic cartoon bird. I guy that I know loves all the logos of the Orioles is Kevin. You may recognize his work from the Orioles Card "O" the Day. It is awesome how everyday he can show us a card of a Baltimore player that we have all seen or one that is totally new and mind blowing. Head over and see what today's card might be..

Next Card: Jim Sundberg, Rangers
Posted by Mariner1 at 7:09 AM

Every time I see this card Larry Fine of the Three Stooges comes to mind.