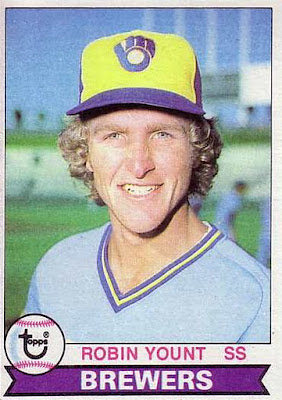 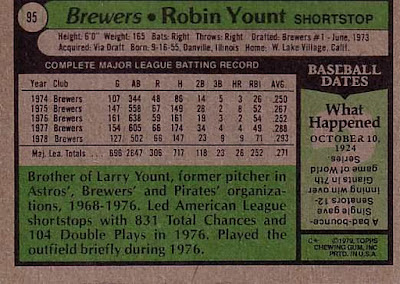 Card Front: Nothing like a young skinny Robin in his road Blues in Oakland in a photo from 1978. He definitely doesn't looked like the grizzled veteran that he was at the end of his ﻿HOF career. How can you not love the intertwined MB that the Brewers used to have for the caps?

Card Back: All the makings of a long productive 3000+ hit career. What makes me love it more is that Yount was one of those guys that did it all while playing for only one team, and not bouncing around trying to hang on. Playing outfield briefly in 1976 would only be a foreshadowing to where Robin would play later in his career.

Six Degrees or less to Seattle: Robin spent 20 seasons playing in Wisconsin. During the strike shortened season of 1981, another Brewer would Frank DiPino. Fast forward to the 1993 version of the Kansas City Royals to find Frank playing with Rico Rossy. Rico would spend another five years in the minors only to make a short 37 game appearance with the Mariners during the 1998 season.

Blog related to the team: Where are the guys or gals that collect Brewers cards and blog? I would think with big names like Prince and Braun there would be more than two. One I did find that is mostly news based is The Brewers Bar.

Next Card: #96 Cleveland Indians, Jeff Torborg
Posted by Mariner1 at 7:26 AM

Play at the Plate said...

Nice card. I can almost feel the authentic cardboard.