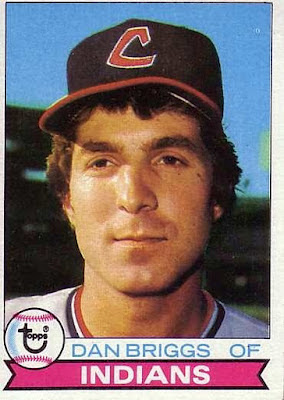 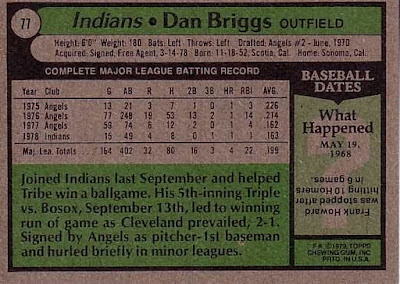 Card Front: I could be wrong on this one, but does it not look like Dan might be airbrushed into his Indians logo? It is hard to believe that Topps would get a photographer to Cleveland in September to get a shot of Dan in his Tribe uniform. I think with all the controversy the Indians have had with the Chief Wahoo logo they could have gone back to this old wishbone C instead.

Card Back: It is hard to believe that a guy with such little big league time got a low number card. Do all Indians fans remember Dan's great 15 game history? Those were his only games in Cleveland. On March 31, 1979 the Indians and the Padres got a deal done that sent Dan to San Diego to be Friar. How about BIG Frank Howard with 10 homers in six games?!

Six degrees or less to Seattle: During Dan's last season in 1977 with the California Angels, Dan played with Sid Monge in Anaheim. While Sid would also eventually move down Interstate 5 to San Diego to be a Padre also it wasn't at the same time. Sid was a part of the 1983 Padres with a guy named Tony Gwynn. Mr. Padre would spend his whole career in Padre colors and be with Roberto Petagine in San Diego in 1995. Roberto spent a blink of an eye with the 2006 version of the Mariners. He went 5 for 27 with 1 HR and 10 K's for a .185 average before the Mariners let him go.

Blog related to the team: I really thought that a team with a long and rich history would have many more fans out there blogging. I decided to go in a different direction for a change. Dan didn't have too many cards in his career, but he did have back to back cards with this one, and a spot in the great 1980 Topps set. Dean Family just recently got to Dan's 1980 beauty in Padres colors and posted it. If you like this set and the set from 1980 go and read up on his posts on that set.