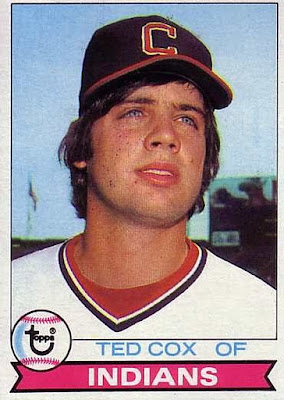 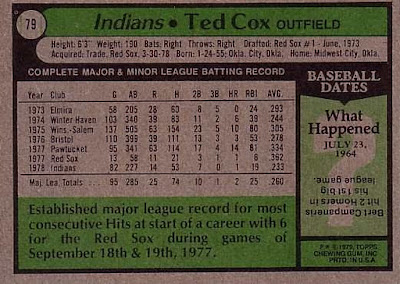 Card Front: Even though I'm looking far away from you, behold the gaze of my blue eyes.... It is strange how we can have the Indians two cards apart and look so different. Ted is staring off at something and it looks as though the Marlboro man is checking out the same thing since he looking there too. Ted spent as much time in the outfield﻿ as the infield in '78 but is only listed as OF.

Card Back: I have always been a sucker for card with lots of minor league stats on them. I also love one that are jammed with 20+ seasons of stats too. Kind of cool to set a record in the Red Sox history since they've been around. I didn't know that "Campy" hit 2 bombs in his first big league game, if it was me I would have retired and gone out on top!

Six degrees or less to Seattle: As you may or may not know, Ted was a Mariner. He would spend the 1980 playing 3rd base for the M's. He would spend most all of 1981 in AAA before being sent to Toronto. As a member of these 1979 Indians though, Ted played with Ron Hassey. Ron would be a part of the 1990 Oakland A's with Mike Moore. Mike was an anchor for the Mariners mound from 1982-88. Ron also was the Mariners bench coach in 2005-06 under manager Mike Hargrove.

Blog related to the team: I found a new way to get other bloggers love too. Ted was a Mariner in 1980 with Shane Rawley, and Shane played with Don Baylor in New York in 1983. Don was the first manager of the Colorado Rockies. The biggest Rockies fan I know out there is hiflew who loves purple rocks. Actually he writes the great Cards from the Quarry. He is doing a great countdown of the past Topps sets, but sadly the '79 set came in at #53 in his countdown but show him some love anyways.