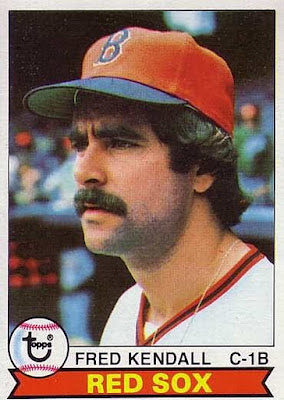 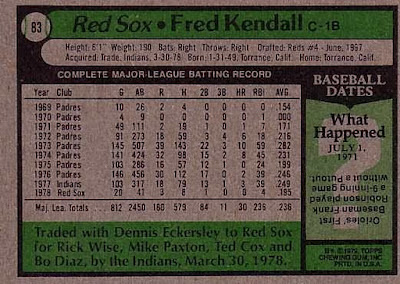 Card Front: A nice tight close up of Fred in all his Fenway glory. There is so much here that makes me giggle like a school girl. Fred has one his two sizes too small hat, his great looking 70's feathered hair, the big bushy eyebrows and moustache, and his slick gold chain popped out. You wonder if Fred was mesmerized by something on the field or if the cameraman snuck up on him.

Card Back: Fred had many years with the Padres but not much success to show for it. It is cool that he got to see 10 games in their first season. It funny ﻿that we have already seen three of the players involved in the trade between the Sox and Indians referenced in the big trade in 1978. Fred was released by the Red Sox after the 1978 season and would be back in San Diego for 1979. How does a first baseman not record a putout in a 9 inning game??

Six degrees or less to Seattle: Since Fred went back to the Padres for his final two seasons of his career he had a slick teammate named "The Wizard". That's right, Fred played with Ozzie Smith in the 1980 version of the Padres. Ozzie would move east and in 1996, he teamed up with Mike Morgan as St. Louis Cardinals. Mike having played for 12 teams went through tons of teammates. Mike was a Mariner in the lower years of 1985-1987 after coming in the Rule 5 draft.

Blog related to the team: I was poking around for more Red Sox fans to give some love and 15 minutes of 1979 fame, and found a blog I didn't know about. George is a fan of the boys from Fenway Park. He also collects Cards of Future Fenway Stars. I have to admit he is posting up a pretty impressive collection of nice cards and plenty of autographs. Give a read, and give him a follow so you can stay up to date.

I looked up that 7/1/71 game on baseball-reference.com. The box score does indeed credit Robinson with no putouts, but there are at least two play descriptions in the play-by-play that end with "1B", so I'm not sure if the box score is actually right.

The Orioles lost the game to the Indians, 3-2, on a walkoff homer with two outs in the bottom of the ninth. Due to the walkoff homer, the Orioles only recorded 26 outs, not 27. Of the 26, there were 15 in which the batter didn't even put the ball in play (13 strikeouts and two caught stealings), as well as three forceouts at bases other than first. Most of the reamining outs were fly balls.

After re-reading the play-by-play, I think there may be only one play description ending with 1B, which was the first out of the 9th inning ("Groundout, 2B-1B"). Maybe the scorer just forgot to credit Robinson with that one in the box score?