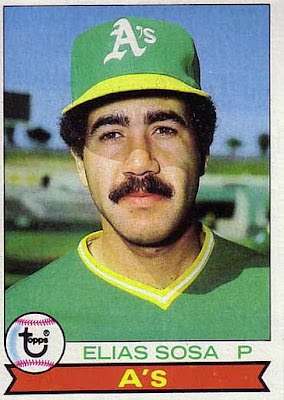 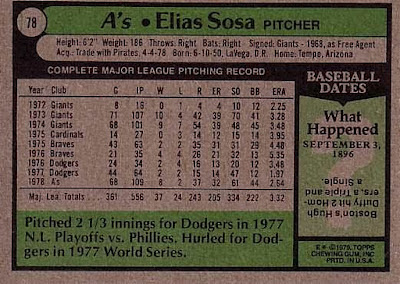 Card Front: Do you ever get the feeling that there is too much of one color going on in a card? Why do feel like everything is green here? While I do love the Athletics old green jerseys, I don't think I would be caught dead in a hat that sits that high off my head. One good thing Topps did was put the A's banner in red to break up some color since you hardly see Elias' name in green.

Card Back: The 68 games that Elias saw in the green and gold of the A's in 1978 was all he would ever play for Oakland. Elias left the A's in November of 1978 and signed with the Montreal Expos in January of 1979 for 3 seasons. Elias was a well traveled guy ending playing for 8 different teams. It is unusual to see a player out of the D.R. that isn't from San Pedro de Mac﻿oris, that place turns out ballplayers!

Six degrees or less to Seattle: During Elias' travels he would team with many guys. As a part of the 1980 Expos, Elias was a teammate of Tim Wallach. Tim played a long time including a stint with the 1996 California Angels, a team that would include Troy Percival. Troy went on to play with the St. Louis Cardinals in 2007 with Brendan Ryan. Brendan came to Seattle last year in 2011 and still plays shortstop for the Mariners.

Blog related to the team: I know that the A's have been down for a few years, but where are their fans. Is it the fact of the cheating Bash Brothers, and then the let our players go Moneyball that makes A's fans hide? We know of a couple A's bloggers, so I thought I would give some love to a guy that collects the A's and any other cheap cards he can find. Everyone say hello to Nick of Dime Boxes. Nick is self confessed Dime Box-aholic. He does come up with some great cheap cards so go see what he's got!