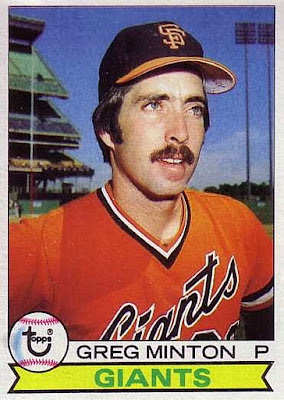 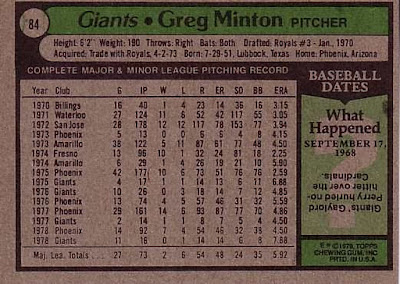 ﻿Card Front: Greg is showing his pride in wearing the Giants orange. I'm not too sure you could get away with the dip in the front lip in today's cards. I'm real sure if I like the orange bill on the old caps, but I do love the Giants return to orange on home game Fridays and still love that old script they used. Help me card fans, are we looking at Shea Stadium in the back ground, or where is this one from??

Card Back: How can you not just love a card FULL of stats? I love how there is just as many years of minor league numbers is there of major league ones too. I guess it is safe to say that the Giants really couldn't make up their mind for awhile on Greg. Eventually he would be in the rotation full time for many years before heading south to the Angels. Nice addition of Gaylord Perry of the Giants throwing a no-no, and congrats to Matt Cain of the Giants for the recent Perfect Game.

Six degrees or less to Seattle: Greg would spend up until the 1987 season in the Bay Area, only to move down to be part of the Angels. While with the Halos in 1990, Greg played with Brian Downing. Brian eventually left Anaheim and was part of the Texas Rangers in 1992 with Matt Whiteside. Matt would bounce around quite a bit and would land as part of the 2005 Toronto Blue Jays with Guillermo Quiroz. Guillermo has seen three stints with Seattle in 2006, 2009 and 2010 and is currently at AAA Tacoma for the Mariners.

Blog related to the team: Where are all the Giants fans, and why don't you blog or collect cards?? I did find an easy link to a blog that at least collects cards of a guy that played for the Giants and currently coaches for the 2010 World Champions. Roberto Kelly is part of the player collections that Jason has on his blog. You might know it better by the name of Clyde's Stale Cards. He has a collection of four guys, one of which is a big name in Japan and he can show plenty of his cards from the land of the Rising Sun. Go give it a look, follow him and show some love.

That's the one thing I liked about Fleer. They put minor league stats all the way back. Topps only did so if the player had less than 4 years of major league stats.