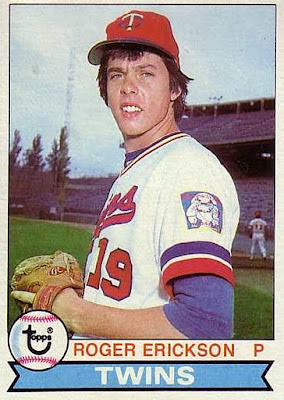 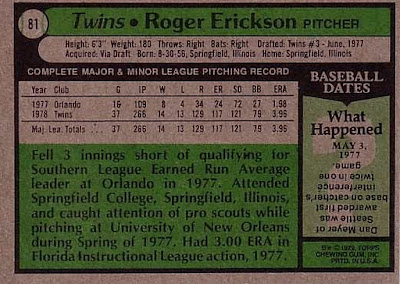 ﻿Card Front: Roger doesn't seem happy to have the camera right in his face. I have to admit I do like the look of the old Twins uniforms except the red hats a bit too much, stay with the navy blue. I'm sure a Twins fan or baseball buff would know if this is the old Metropolitan Stadium in Minnesota or did they have a double deck spring facility?

Card Back: That is definitely a quick jump to the Majors. One half of a season in the minors and right to the Twins. You would never see a rookie go for 266 innings in his first full season now, or even a horse veteran pitcher( Damn pitch counts!). It is amazing that there is more info than stats for Roger. Nice to see the Mariners get love in the factoid section. Two catcher interferences in one game is rare.

Blog related to the team: I'm surprised with two World Series titles in their pockets, the Twins don't have more blogging fans. We can tie Roger to a collector of a team that wasn't around in 1979 and show them some love then. Rays coach George Hendrick played with George Frazier in St. Louis in 1979, and Frazier was with Roger as a Yankee in 1982.  I think if you have read a blog or two in your day, you might know who the Troll is. There is only one, and this Troll Might Rule!! Not only does he love his Tampa Bay Rays, he is a big roller derby guy with his hot wife of the Bradentucky Bombers. Go over and poke around the Troll's den.

I think the reason you don't see rookie seasons like Erickson's anymore is because what happened to his career after the first season. He pretty much was ineffective. I saw him in the minors in 1984 and I remember he did something that got him yanked out by his manager.