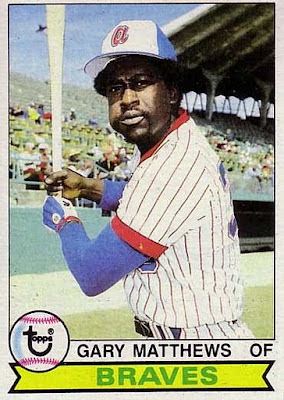 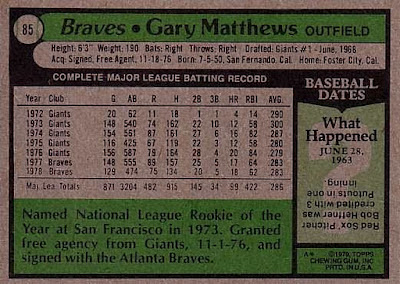 Card Front: ﻿Here is Gary in all his pinstripe glory. I'm still not sure I think that was the right way to go for the Braves. While I liked the "softball" uniforms with the feather on the sleeve, I don't think they look right in stripes. You have to love how Gary is giving the camera guy the mean mug with his multi colored batting glove and his big ol' chew.

Card Back: It is pretty easy to see that after a brief stint in San Francisco in 1972, it was full throttle for Gary from there. You can see from the numbers why he won the ROY in 1973. It is fascinating to wonder why they let him go as a free agent while putting up such good numbers. While there might not have been great power numbers, I would take a guy that almost hits.300 any day.

Six degrees or less to Seattle: As you may or may not know, Sarge's final stop was Seattle for a couple months in 1987. Did you know though that while Gary was a member of the 1984 Chicago Cubs, he would play with Lee Smith? Lee would turn around and play with the Baltimore Orioles in 1994 with Mark McLemore. Mark would spend 4 seasons in Seattle from 2000-2003 and was quite a fan favorite here.

Blog related to the team: There are so many Braves bloggers I don't know if we can plug them all. I will give one of them a little fame here and now though. One guy that's been around the block you all might know. Let me introduce to you Colby(aka Flywheels). Colby runs the great Cardboard Collections. He is a die hard Braves fan, he also gives us a monthly group break of affordable cards, and will always have a wonderful Sunday verse. Go over and see him, send him some Braves, or sign up for a group break, and watch the fortunes come to you and him.

It's too bad the Giants couldn't afford to keep Gary Matthews :(. When I was a kid I thought the feather on the Braves' uniform sleeves was a fish.