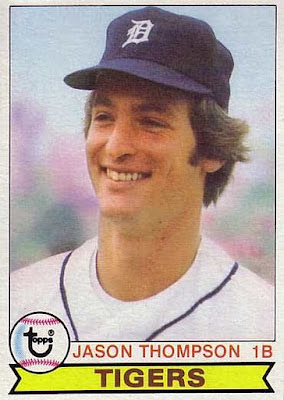 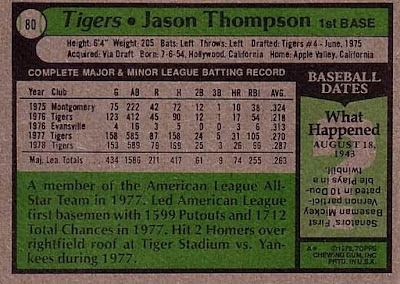 ﻿﻿Card Front: A nice tight close up of Jason for us. How can you not just love the simplicity and style of the classic Tigers look. The more baseball tries to be hip, some teams just tick to the standard and don't change. You have to love the beauty of the Old English D, but Jason really needs to cut that hair. I know this was the 70's and all, but nowadays you look like a hippie boy!

Card Back: I would say that's what I call on the fast track to success. Spend a half a season in the minors after being drafted, and the next year you are in the big show. You make the All Star team in your second full season, and again in 1978. Midway through the 1980 season he was sent to the Angels. California would send him off to the Pirates a year later, and Jason was a Pirate All Star in 1982. His career would end halfway through the 1986 season in Montreal.

Six degrees or less to Seattle: In Jason's first season in Detroit, Jason played with Johnny Wockenfuss in 1976. Johnny would be a part of the 1984 Philadelphia Phillies with Larry Andersen. Larry spent the 1981 and 1982 seasons wearing Mariner blue among his 6 stops in the Majors.

Blog related to the team: Tigers fans are all around. One fan that is out there that not only writes about the Motor City Kitties, but baseball in general in John. If you go over to John's Big League Baseball Blog you can read about baseball and some of it's great history. Tell him I sent you and enjoy his work.