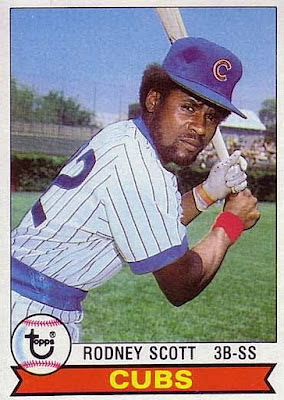 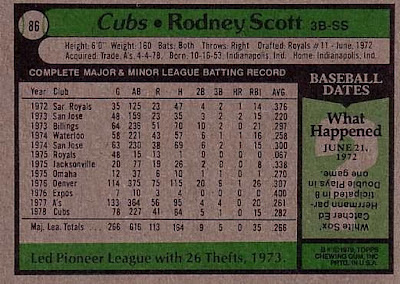 Card Front: Rodney is looking as bad as bad can be in his pose. With his I'm gonna knock you out sucka look to his big time afro. I never realized the Cubs had such a big blue snap belt on their uniforms back then. I'm happy to see that Topps could send someone to Wrigley Field to take Rodney's picture during the 1978 season. How could you not love the ivy and the green grass? That is one stadium on my list of must sees.

Card Back: I guess Rodney really couldn't impress the Royals to stay with them after a few years in the minors. He got a handful of games north of the border and stuck with the A's. In all his travels, Rodney even was a Ranger for 11 days in the spring of 1977. Rodney was part of three different deals with players that had Mariners ties. How in the world did Ed Herrmann participate in 8 double plays in one game as a catcher??

Six degrees or less to Seattle: During Rodney's one and only season in 1975 with Kansas City, he played with a young George Brett. George would spend part of the 1992 season as a Royal teammate of Tom "Flash" Gordon. The Flash would also make it to the 2007 version of the Philadelphia Phillies with Freddy Garcia. The "Chief" would come to Seattle as part of the Randy Johnson deal and spend from 1999 thorugh midway through 2004 wearing Mariners colors.

Blog related to the team: There are so many poor Cubs fans. They have waited so long for a champoinship to come their way. There are also many of them that blog about cards. One of the better and long time bloggers give us good stuff everyday. I'm sure if you have read any blogs you have heard of Hackenbush. He is the man that always tells us you Can't Have Too Many Cards﻿. He can hit you with Birthdays, Cubs knowledge, or just about anything in general. Go read up, GO NOW!!

If I remember right, the nickname on his APBA card was "Cool Breeze"

I'm bummed that there aren't any Wrigley or Fenway pictures in the 1986 set.

Hermann's feat is much less interesting when you realize that catchers are credited with a putout every time they catch a third strike. All eight of Hermann's putouts on 6/21/72 were via strikeouts.