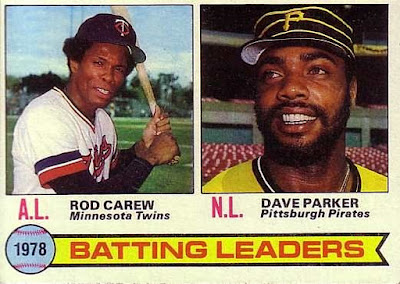 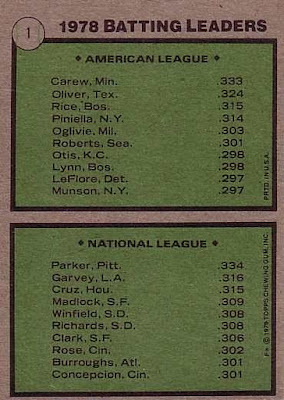 This is the first card in the set of 726 cards. Unlike the modern cards that have the top three from each league, back in these days it was one card. The good thing with that meant more cards for players to be on.

Card Front: On the left is AL batting champ Rod Carew of the Twins. Rod would not play for the Twins in 1979, being traded to the Angels in February of '79. Rod led the AL hitting .333 in 1978. On the right is the NL champ in "the Cobra," Dave Parker. Dave would win the NL batting title at .334, and the NL MVP in '78 despite a facial injury in June.

Card Back: Do you like deep green? I hope so because you will see lots of it for the next 725 cards. The list of the top 10 for each league has three guys that are in the Hall of Fame. One that will be on Lou Piniella, and one that could be in Pete Rose. Many household names amongst all 20 players.

Six degrees or less to Seattle: The easy one is Leon Roberts. He was a Mariner. Obviously Lou managed in Seattle. Jose Cruz would have his son play in Seattle. Jeff Burroughs would also spend 1981 in Seattle.

I love your blogs! I was looking through my 1979 set and found a Yankees' team card that was number 1 in the set (I was missing the batting leaders card). Do you know what other 1979 Topps set might have had the Yankees' team at card #1?