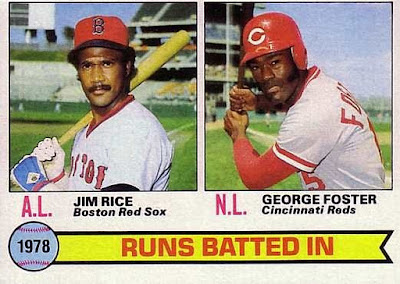 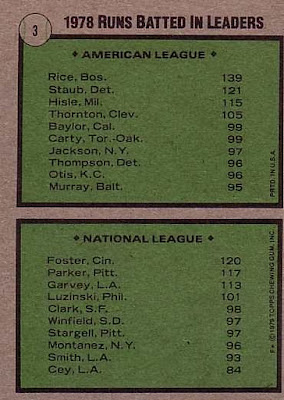 Card Front: Once again we see the same players from card #2. It is obvious who the power hitters were in 1978. It looks like the picture was taken the same day as the one on the previous card, just put a bat in their hands.

Card Back: Once again we see guys in the Hall of Fame. I guess you can expect it on a 33 year old card. There is a nice mix of teams for both leagues. Pittsburgh and Los Angeles dominated the NL in '78. A 38 year old Rico Carty would be with two teams and still get nearly 100 RBI's-nice work old man.

Six degrees or less to Seattle: While most guys can find a link to the Mariners, I decided to dig deeper this time. AL #3 Larry Hisle would play with Bob McClure in 1979 with Milwaukee, McClure would team up with Jamie Moyer in St. Louis in 1991, and Jamie would play with Jaime Bubela in Seattle in 2005. At the bottom of the NL list is "the Penguin" Ron Cey. Ron would spend 1986 in Chicago with Cubs teammate Rafael Palmiero. Palmiero would team with Erik Bedard in Baltimore in 2004, and Erik spent a little time in 2011 with Dustin Ackley in Seattle before getting shipped to Boston last year.

Great to see another blog started! I put a link to your blog on my recent post (Leon Roberts) on the '83 Topps blog. I like the six degrees feature...good stuff.