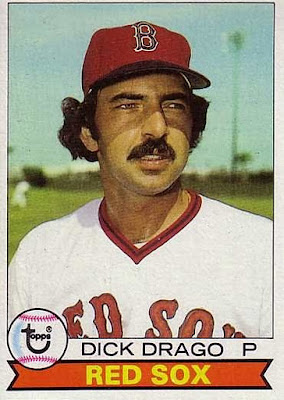 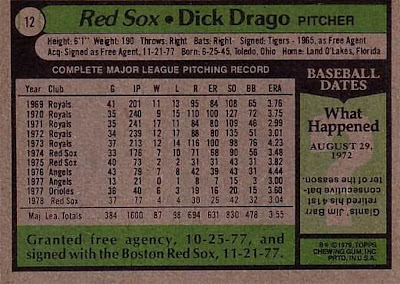 Card Front: The first of many classic posed shots from Spring Training. I personally still like the look of the classic red Red Sox hats. You have to wonder who the blurry player is over Dick's right shoulder.

Card Back: Just a look at Dick's stats and you can tell he was a fairly consistent pitcher. Obviously he made the switch to the bullpen starting in 1975. Interesting that he would head back to the Red Sox so quickly after the '77 season. I like the home of Land O' Lakes, but isn't that a brand of butter?

Six degrees or less to Seattle: Of course Dick would finish his career in Seattle in 1981 after being traded for Manny Sarmiento. But he can also be linked to Tom Wilhelmsen. In 2011, Tom teamed with crazy man Milton Bradley. Milton was an Expo in 2000 along side Charlie O' Brien. Charlie spent time in Oakland in 1985 with former Mariner Bruce Bochte. Bruce and Dick played together as California Angels in 1977.

Blog related to the Team: I thought of a new add on to these posts, adding a blog of the team related to the card. If you would like to be linked to a team, let me know. While there are many Red Sox centered blogs, my first link will go to Adam of Thoughts and Sox﻿.

http://agiantblog.blogspot.com for the Giants :). I'm going to reactivate the blog in about a month.

I'm always up for a free plug. White Sox - www.mysportsandsportscards.blogspot.com

Keep up the great work on this site. I enjoyed the first batch of cards with the dual players on them. I remember getting those in the mid 80's and thinking they were the coolest things. Great players from the past, and there were 2 of them. Plus cards from before I collected. It wasn't like now-a-days where it's easy to find vintage. You just had to stumble upon it at your LCS.

So yes, on the plug. Sorry, got a little longwinded.

Thanks for the Link.