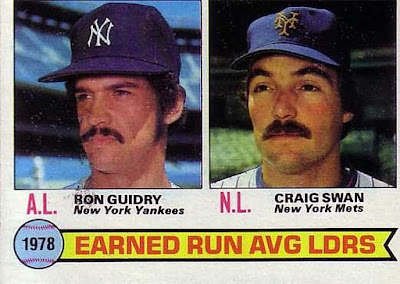 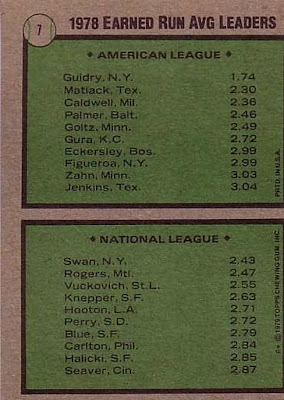 Card Front: New York, New York. We aren't just talking about the city. ﻿Obviuosly pitching in the heat of the Big Apple in 1978 was to the advantage of the guys on the mound. It is not too normal to find guys from two teams in the same city being leaders in a statistical category.

Card Back: Guidry had a monster season. While not quite in Bob Gibson ERA numbers, I would take one under 2 any day. He was almost a whole run better than Swan for the season. I would think that anyone would gladly take the numbers of any of these top 10 guys from either league.

Six degrees or less to Seattle: While we looked at how Ron could hook to Seattle on a previous card, let's try #2 Jon Matlack. One of Jon's teammates in Texas in 1978 was Danny Darwin. Danny was a White Sock in 1997 with Greg Norton, and Greg would see time in 2008 with Tug Hulett as a Mariner. Craig had to take longer route to get here. One of his 1981 teamers in New York was Ray Searage. Ray was a Brewer in '86 with Chris Bosio. Bos would be a good Mariner, and spend 1996 with a young Raul Ibanez.

Guidry certainly had a phenomenal season, but was backed by a team that -- while they had their ups and downs -- still managed to win the Series.

The Mets, on the other hand, were abysmal in 1978. That makes Swan's achievement just as noteworthy, begause he didn't have Reggie, Thurman and Nettles helping him offensively.