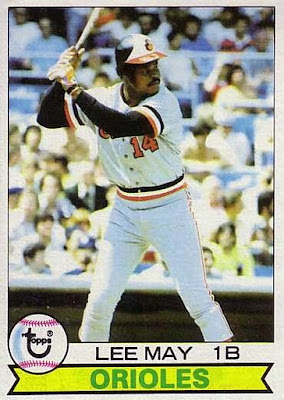 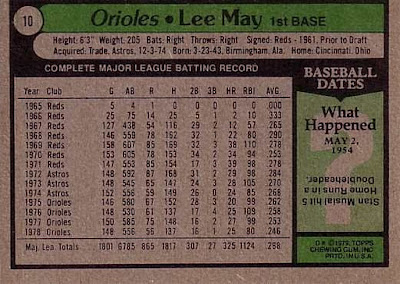 Card Front: Lee is showing off a classic looking right handed batting stance. I'm guessing from the looks of the stadium and the road unis it is Yankee Stadium. It is nice to know the O's are going back to the classic look. Who doesn't love the cartoon Oriole?

Card Back: Look at that long list of stats. While no big offensive numbers stand out, you must do something right to have played at that time for 14 years. I love the What Happened part: Stan Musial hit 5 HR's in a double header. Yeas kids, back in the day they scheduled two games on the same day every year.

Six degrees or less to Seattle: With a little work we can connect Lee to the Mariners. Way back in 1970 Lee played with some guy named Pete Rose while in Cincinnati.﻿ Pete spent a short time in Montreal in 1984 and teamed with Rene Gonzales. Rene would play along side Jamey Wright as a Rockie in 1997, and Jamey Spent time in Seattle last year with a young Trayvon Robinson.

Email ThisBlogThis!Share to TwitterShare to FacebookShare to Pinterest
Labels: #10, 1st Base, Lee May, Orioles

...or you could just connect May to his 1979 O's teammate Dennis Martinez, who'd play in Seattle someday himself. ;-)

I thought about it but those are too easy and I linked El Presidente in an earlier post. Those one step ones are easy, the deep ones are more fun. Hope you and everyone else is enjoying the blog so far.

Until I looked at this back again, I hadn't realized how many 20+ home runs years in a row Lee had.

Didn't realize he had such a consistent career.