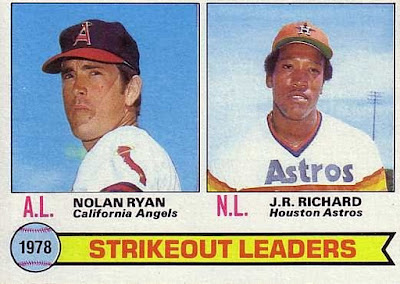 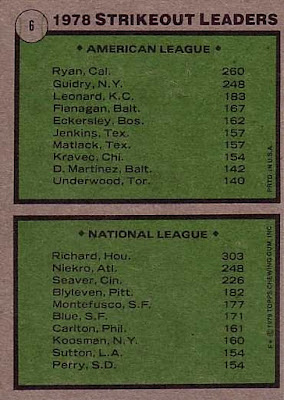 Card Front: Even at a younger age, the look on Nolan's face would scare me if I was in the batter's box. While J.R. looks nice and pleasant, he was a beast on the mound. Who would think that this card is a foreshadowing of teammates in 1980 in Houston. Sadly, J.R.'s career would end that year due to a stroke at the age of 30. The Astros could have really good if they could have stayed together.

Card Back: Talk about strikeout numbers all over the board. Amongst all the Hall of Famers and big names, the separation between #1 and #10 is anywhere between 120 to 150 K's. Back in these days, guys didn't have the 'roids to bump their numbers so they had to adjust and play small ball, or take a seat on the bench after whiffing.

Six degrees or less to Seattle: Most people know that Nolan's last game was on September 22, 1993 in Seattle. Steve Dreyer would finish the at bat against Dave Magadan in the bottom of the 1st inning. As far as hooking him to a Mariner, it's not too hard. Nolan had some time with Matt Whiteside in Teaxas in that '93 season, Matt was a Blue Jay in 2005 with Guillermo Quiroz, and Q has been in and out of the Mariners system three times, including this upcoming year. NL leader J.R. spent the 1972 season with Ken Forsch as an Astro, Ken would move on to play with the Angels and Dick Schofield in 1983. Dick would hang with Chan Ho Park as a Dodger in 1995, and Chan would hook up with Jeff Clement, as a former Mariner in Pittsburgh in 2010. As a side note, some of the names in the first round drafted after Clement: Ryan Braun, Troy Tulowitzki, Andrew McCutchen, Jay Bruce, Jacoby Ellsbury, and Matt Garza. Thank goodness Bill Bavasi isn't making draft decisions anymore and Jackie Z has a mind for good prospects.