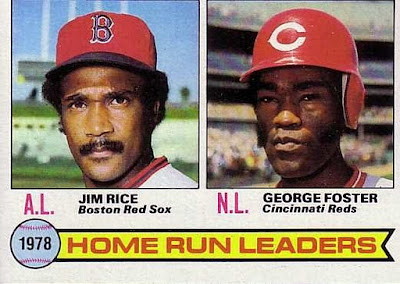 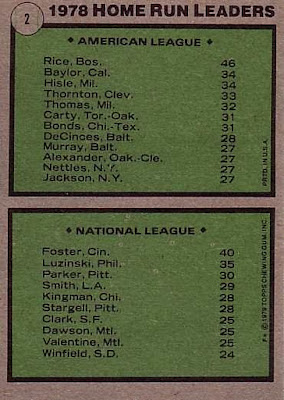 Card Back: There is guys in the hall all over these lists. In all there are 6 HOF'ers. Jim Rice would lead all players with 46 bombs in 1978. George's power numbers dropped from 1977 when he hit 52 homers. In a period from 1966-1989, George was the only player to hit more than 50 in a season. The steroid era would obliterate those numbers.

Six degrees or less to Seattle: Doug DeCinces would play with Dennis Martinez in Baltimore in 1978. Dennis would play for the Mariners in 1997. He also spent time with Gary Roenicke in Charm City. Gary would play with his brother Ron on the San Bernadino Pride in 1990. Ron would spend the 1983 season with the M's.

In the picture, Foster looks like he just heard somebody say something bad about his mother.