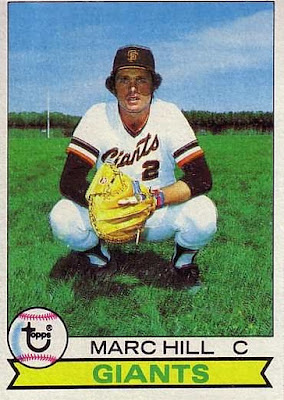 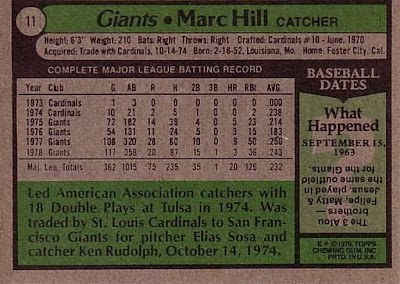 Card Front: A first card for Matt of A Giant Blog.  Marc is ready in a catcher's position. I don't know if I would want to take a pitch without gear though. I think this spring training shot was taken in Phoenix before the Giants moved to Scottsdale. I still like the old style of Giants lettering on the jersey.

Card Back: Wow, Marc was part of a 2 for 1 deal that brought him to San Francisco. Obviously, '73 and '74 were September call up years. While he played regularly as a Giant, he isn't much of an average or power guy. Pretty awesome that the Alou brothers would make up a whole outfield for the Giants in 1963.

Six degrees or less to Seattle: Marc would eventually move on from San Francisco, and play as a White Sock(Sox?) in 1982 with Dennis Lamp. Lamp would last until 1992, sharing the mound with a young Miguel Batista. Miguel would be a Mariner in 2008 along with the god awful Carlos Silva. Thanks to Johngy for reminding me that Marc spent a short time in 1980 as a Mariner.

Don't you count his season in Seattle in your Six Degrees feature? Booter was very popular during his time as a White Sox (Sox, I believe).

The Giants really needed help behind the plate in the 1970s. Mike Sadek just wasn't full time major league material. Thanks for the plug on A Giant Blog -- I'm going to bring the blog back when spring training starts :)