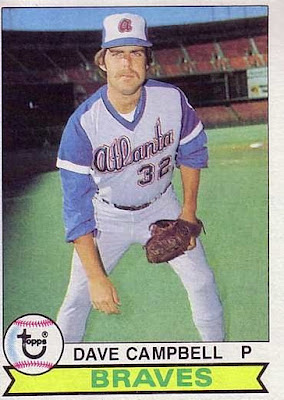 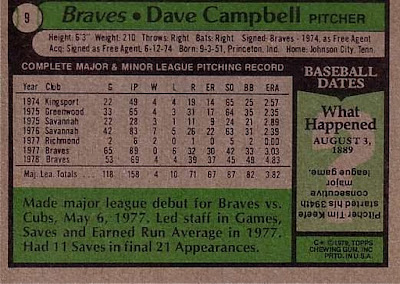 Card Front: Dave's trying his best to look like a tough reliever with his long sleeves and his chaw in his left cheek. I'm guessing from the look of the gray road unis and the stadium, this picture was taken at Candlestick Park in San Francisco. Hard to believe that with Topps' new star guys first mentality, in 1979 little known Dave would be the first solo player card in the set.

Card Back: Little did we know that this would be Dave's complete Major League stats before 1979 even started. Dave was sent by the Braves to the Expos at the end of spring in '79 for Pepe Frias. He would spend three seasons with the AAA Denver Bears before retiring. August 3, 1889 was before my time. HOF'er Tim Keefe pitches his 394th CONSECUTIVE game! This dude pitched 535 innings in 1886, and 619 in 1883! Of his 600 games pitched, 554 of them were complete games!! Different from today's pitch counts and inning limits.

Six degrees or less to Seattle: Dave's last season in 1978 was spent with Jerry Royster as a Brave. Jerry would hang out with Al Leiter as a Yankee in 1987, but Al turned into a Marlin in 2005 along with Jason Vargas. Jason was on the staff in 2011 with new Mariner Blake Beavan.