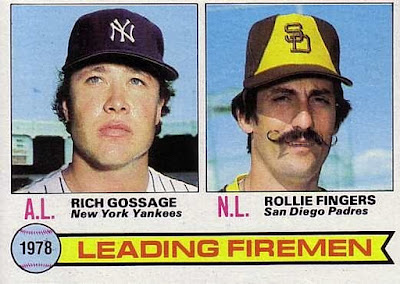 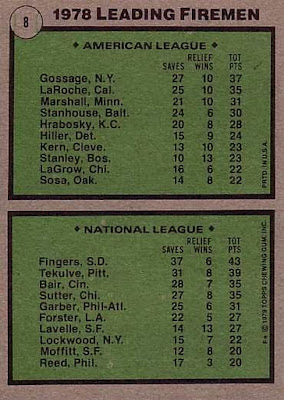 Card Front: A less intimidating looking "Goose" Gossage without the moustache. While Goose would eventually have the trademark big Fu Manchu, it was no match for the masterpiece that Rollie is probably most famous for. You have to love the old colors of the Padres from 1978.

Six degrees or less to Seattle: Gossage would finish his career in Seattle in 1994. How about Dave LaRoche in Seattle? Maybe not directly, but in 1982 he was a Yankee with Lee Mazzilli. Lee would play with a young John Olerud in Toronto in 1989, and John would team up with Bucky Jacobsen in 2004. Rollie would pitch against the Mariners in his career. Luis Salazar war a Padre with him in 1980. Luis would hook up with Greg Maddux on the north side as Cubs in 1989, and before leaving the Padres in 2008, Greg would play with recent Mariner trade victim Cha-Seung Baek in San Diego.

I soooooooo wish the Padres would use interesting colors again. I love those old 70's & early 80's Padre uni's. I don't know why the team seems to think that drab gray & drab beige/brown are cool. Gimme those brown & yellow uni's with a mod font & triangle cap any day!