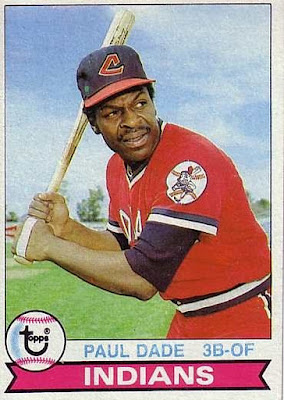 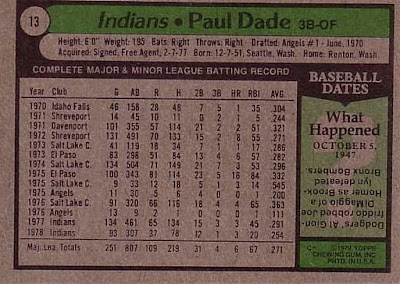 Card Front: How can you not just love the all red Indians uniforms? The classic wishbone C on the is something they should definitely bring back. What is with the tape just below the knuckles on his left hand? I don't know where the Indians trained back then, but the field does look good.

Card Back: It seems the Angels couldn't decide to Paul up with big club, or keep sending him to Salt Lake City. His best move was to sign with the Indians instead. It is interesting to see that Paul is form Seattle, and went to Nathan Hale High School. ﻿

Six degrees or less to Seattle: Paul can be linked to a player from last year's team in Michael Saunders. The Condor played with Wily Mo Pena last year. Wily played with one time Mariner prospect Jason Varitek as a Red Sox in 2008, and Jason would team with Dennis Eckersley in Boston in 1998. If you then go all the way back to 1977, Dennis and Paul were members of the Indians together.

Blog related to the team: One of the few Indians centered blogs that I know of is Indians Baseball Cards. While it is predominately Indians, there is planty of other good stuff to read also.

Paul looks afraid of the ball or something here LOL

I love those old colorful uni's in the 70's & 80's. I never got to see the Indians play in these threads, but I would've loved them if I did. I also like the style of the "C" a LOT better than the style they used after it (and again in 2011).