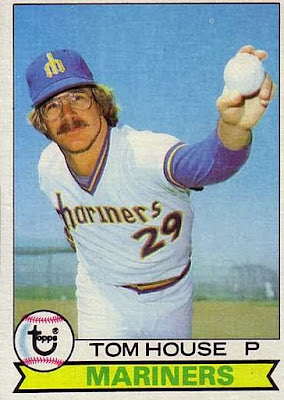 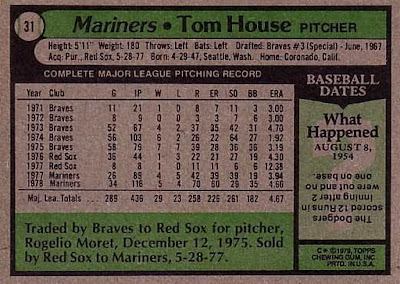 ﻿Card Front: Here is Tom showing us the follow through of a four seam fastball coming toward you. I love seeing the old time Mariners uniforms coming back to life.  Obviously from the blues skies and home whites, this had to be taken in Tempe in March and not the Kingdome.

Card Back: Surprisingly, this card would show his entire career stats on it. Tom would be released before the 1979 season. I wonder what the Mariners had to pay the Red Sox for House's services. While Tom was born in Seattle, he would graduate from Nogales High in La Puente, CA and head for USC.

Six degrees or less to Seattle: As you see, Tom is a Mariner so six degrees isn't needed. Let's do a little history on Tom. After being released in '79, he went back to USC and got his second masters in 1981 in Performance Psychology. After a brief attempt with AAA Hawaii in 1983 to return to baseball, he became Dr. House with a Ph.D in psychology in 1984. Tom has worked as a pitching coach in Houston, San Diego, Texas and at USC.

Blog related to the team: I can't plug my blog all the time, because I don't post enough to be entertaining. Dr. House is a man of history, catching Hank Aaron's 715th HR in the bullpen in Atlanta. He also has a website of his own. Head on over and visit Tom House.

Next Card: #32 Jerry Mumphrey, Cardinals
Posted by Mariner1 at 5:44 AM