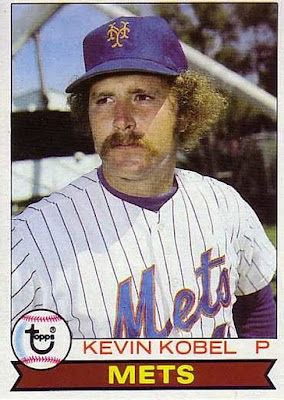 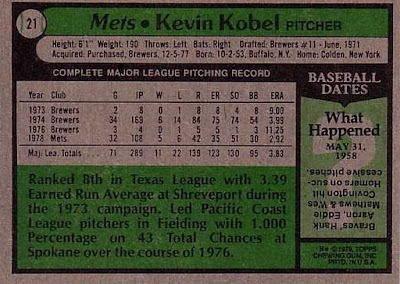 ﻿
Card Front: A great spring photo of Kevin in Florida. ﻿I'm mysterious ladies, I'm looking away from you. You have to love the beginnings of a good redheaded afro, and the bushy Fu Manchu moustache.

Card Back: It seems as 1973 and 1975 were September call ups to the Brewers. The Brewers would have Kevin start all year in '74, and the Mets started him in 1978. It is strange to think today how common it was then for teams to purchase players' contracts. The Mets basically bought Kevin from Milwaukee like a steak. How about the Braves in 1958 with homers on successive pitches.

Six degrees or less to Seattle: As a Met in 1980, Kevin played with Steve Henderson. Steve was a Mariner later on. Steve would hang out in 1986 in Oakland with Steve Ontiveros. The second Steve would team with Jeff Schaefer as Athletics in 1994, after Jeff spent parts of the last three years in the Mariner infield.

Blog related to the team: There are plenty of fans of the Mets. I feel for Mets fans because they don't get the attention of Yankee fans. One blogger who carries the Mets flag proud is ..Joe of The Sandlot. If you know Joe or have traded with him, he is a generous guy always sending packages out of the blue for you. Look him up, and watch the movie by the same name.

Kobel looks like he could be a roadie For Grand Funk Railroad.